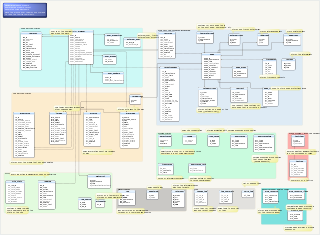 A huge amount of businesses and non-profit organisations rely heavily on databases to store vital information and also underpin online interactions with suppliers and customers alike. There really is no substitute for an organized collection of accessible data - especially a database with a good data management system. The management system needs to allow for these common operations in the very least:

Facilitating these operations allow the database to accurately capture and represent data as well as providing a basic model of the information and means for further analysis - all of which are invaluable to market research. A good data management system allows easy interfacing between the database and a human user or application/program querying it. It should also allow for some metadata to be stored about the tables within the database as a whole. Generally, each record in a database will have some primary key identifier so that even if, for example, you have two customers called John Smith that bought a cellphone, their other attributes would not get mixed up.

Due to their widespread use and importance, database research is an active research topic, and has been that way since the 1960s. E.F. Codd's relational databases were a large step forward and most databases today follow his relational model (as does the general type described here). In addition to database theory like this, the production of prototypes is an active sub-field of database research, along with models, the concept of atomic transaction and related concurrency control techniques. Top database research academic journals include ACM, TODS (Transactions on Database Systems) and DKE (Data and Knowledge Engineering). There are also conferences on the subject held annually which enjoy widespread attendance from this generation's foremost minds on database theory.

• Write queries using the SQL GROUP statement to produce the requested reports as described below. In general, to make grouping meaningful, a function such as COUNT or SUM is used. In the below tasks, COUNT(*) is the desired function to include in your SELECT statement along with the requested fields. 6. Display total num

A centralized multi-user database has a log file and was backed up yesterday. The hard drive on which the database is stored crashes while being used. The disk was not mirrored. Explain how this database should be recovered. Be specific.

Managing enterprise data used to fall primarily on mainframe computing but then personal computers were introduced. How are the two computer styles different? How did the management of data shift from a mainframe system to a PC-based computing system?

I need detailed (elaborate) help with the following question with all cites duly referenced. Question The process of starting with world objects and modelling using entity-relationship diagrams is referred to as a bottom-up process. Starting with one large table and functional dependencies using normalization is referred to

Some vendors' versions of SQL have proprietary extensions (i.e., additional functionality) not found in standard SQL. Why do you think they do this? In your view, what are the advantages and disadvantages of doing this? Is it a good idea for end users (developers, DBAs, etc.) to use these extensions? Discuss how SQL differs from

Discuss the importance of data modeling to the success of an information system development. Also describe how vocabulary can be used to improve the communication between developers and users.

I am having trouble running several query's for a database I created in Microsoft SQL Management Studio. The data base code is attached. 1. Create a view named CustomerAddresses that shows the shipping and billing addresses for each customer in the MyGuitarShop database. This view should return these columns from the Custome

You have been asked to develop a database system plan for a local company (or a company of your choosing) that wants to track its customers/clients, appointments, billing, and employees. The company requires that you complete the following: 1.Justify the need for the proposed system. 2.Produce a formalized database design pla

I created a guitar database. I am having difficulties running several query's I don't fully understand. I have attached my database, as well as a file showing what queries I am having trouble with.

I need some help in this exercise: Write and execute an SQL query in SQL*Plus A. Table Creation and Management 1. Create a new table using the CREATE TABLE command. Use your first name and your last name for the name of the table (for instance, for John Smith the name of the table will be JOHN_SMITH). Make sure to include

1.Use the following business rules to draw the fully labeled Crow's Foot ERD in Visio. The diagram must include all entities, attributes, and relationships. Primary keys and foreign keys must be clearly identified on the diagram. Write all appropriate connectivities and cardinalities on the ERD. a). A customer must own at least

Create a query in Access. You have several users and would want to create a query where you can pull information from 3 tables (Lab Audit, Gas Cylinder Pressure Reading, and GC ID Mix analysis) for one particular user. The query should ask for user name (or initials) and a date range as input. Database is attached.

Provide SQL statements to create the database and populate it with sample data at least 4 rows per table modify the database by adding an additional column "Deleted_Date" to those tables that represent entities that could contain data which can be deleted and justify your rationale in a short paragraph. Explain what the tra

I need help with doing some web search research on relational databases and explain briefly how such a database works, and basic components. Then, go to a website with a data entry form and discuss that form in terms of a relational model. I also want to include important information about linking two flat files, what informatio

Demonstrate how you would use a temporal database to keep track of dates.

When to Use a Relational Database Model

1. When would you use a relational database model? 2. What makes up a database system?

Consider a disk with the following characteristics (these are not parameters of any particular disk unit): block size B=1024 bytes, number of blocks per track=10, number of tracks per surface=400. A disk pack consists of 15 double-sided disks. (a) What is the total capacity of a track? (b) How many cylinders are there? (c)

The system development team at Wilson Company is working on developing a new customer order entry system. In the process on designing the new system, the team has identified the following class and its attributes: - Inventory order - Order number, - Order Date - Street address - City - State - Zip - Customer type - I

Please review the attached document and construct the database using Access. STEP 1 Review the ERD below to understand the entities, attributes, primary keys, and relationships that you will create in your Access database. STEP 2 • Run Access 2010. • Select the blank database icon in the main window.

See the attached file. 1) Your task is to first "sketch" a Student Information table (basically what columns should be included in the table) using the Student_information table at the following as example. Your table should contain the following: Column heading include all the attributes that need to be in this table. P

There are many kinds of entity relationships in a database model. The relationships can be classified by the following things. Cardinality: maximum and minimum Degree: binary, ternary, degree 4, and so forth Entity type: strong, weak, ID-dependent, and supertype/subtype What are these different types of classificatio

The current practice of a particular part of water resources engineering is supported by a variety of commercial software. Pick a specific domain within water resources engineering. What is the software? What does it do? Who uses it and why? What are the assumptions and limitations of the software? What is the future of this sof

Complex distributed systems that require controlling mechanism such as airplane cockpit or a power plant.

Besides a power plant or an airplane cockpit, what is an analogy of some complex distributed systems that need to be controlled?

Designing and Populating a Table

I need clarification regarding the following questions: Every large organization has large files or databases containing data used in operating the business. Does a data warehouse differ from these operational files or databases? Explain why or why not. (At least 200 words).