Archaeology is the study of past human civilizations with a focus on understanding human evolution and overall biological and cultural progress. Evidence suggests that humans have existed on this planet for three million years.¹ However, the current level of human sophistication and societal order is radically different from what was present three million years ago. 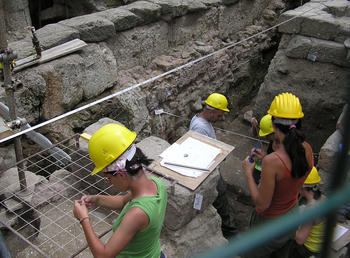 Thus, it is through the study of archaeology that human progression can be analyzed.¹

The study of human history is critical to understanding how Homo sapiens evolved. In fact, three million years ago, the time when human existence commenced, Homo sapiens were not yet developed.¹

Rather, modern humans evolved from previous Homo species, which were less developed. For instance, Homo erectus was the dominant human-like species present in the Lower Paleolithic era (2.5 million years ago). Evidently, the study of archaeology is critical to retelling how past societies evolved and present humans came to be.¹

1. Hirst, K. History of Archaeology: The Series. Retrieved May 23, 2014, from http://archaeology.about.com/od/historyofarchaeology/a/history_series.htm

Delineate the major fields of anthropology as well as their sub-fields. interest is forensic anthropology. Based on what you've learned about the four major fields thus far, which sub-discipline do you find most interesting and why?

After reading"Identifying victims after a disaster" Is Forensic Anthropology effective as a discipline? Why or why not?

(1)The Tall and the Short of It By Barry Bogin (2)Teaching Theories: The Evolution- Creation Controversy By Robert Root-Bernstein Donald L. McEachron Robert Root-Bernstein (3)Great Mysteries of Human Evolution ... By Carl Zimmer (4) A New Kind of Ancestor: Ardipithecus Unveiled. By Ann Gibbons (5)What are Friends

The Importance of Nubian (Kush) Pyramids

Please help with the following archaeology problem. Include references as part of your answer. Describe the importance of saving the Kush pyramids in Africa.

This solution briefly examines why the presentation of human and animal figures are strictly forbidden in Islamic art.

Please help me to identify the geographic differences between Japan and Korea (island focus), as well as their similarities.

Archaeology article summary & abstract. I need help in putting together a summary of an Egyptology article. Thank you.