Prehistory refers to all time occurring before the invention of writing and the practice of recording history. In its broadest sense, prehistory goes until and including the creation of the Universe. In reality, the area of study is typically concerned with the period between anatomically modern humans first appearing on earth until the beginning of recorded history. 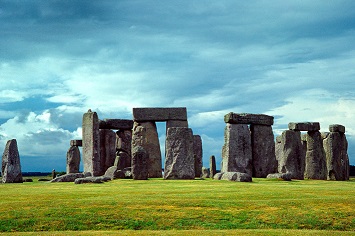 Because of the "localized nature of the prehistoric period, different cultures began producing written historical records at different times."¹ Therefore, the accepted end of the Prehistoric age varies substantially from culture to culture and region to region. Because of this, the lines between prehistory and history are often blurred and unclear.

By definition, there are no written records from prehistoric times so it is crucial to be able to date prehistoric materials. Prehistoric archaeologists, anthropologists, geneticists and linguists all contribute to this area of study. It is custom for prehistorians to use the three-age system when dividing human prehistory. These three time periods are the Stone Age, Bronze Age and Iron Age, named after their respective tool-making materials.

The Stone Age is divided into the Paleolithic, Mesolithic and Neolithic periods. Many human traditions that thrive today "were adopted in this age, including burial of the dead and early art and music."¹ The Bronze Age is marked by widespread use of metal working of naturally occurring ores to cast bronze. The Iron Age is characterized by the adoption of iron, which played a huge, innovative role in the creation of more advanced agriculture and religion. It was during the Iron Age that most cultures began recording relevant history for the purpose of an academic resource.

Identify the historical issue for juvenile delinquency in the US. Identify several peer-reviewed journal articles for this topic, and provide annotated notes for each reference.

Good and Bad of the 17th Amendment

In your opinion, what were the consequences (both positive and negative) to adding the 17th amendment to the Constitution? Argue whether or not the changes presented by this amendment were consistent with the intent of the Founding Fathers when they wrote the Constitution. Explore through writing how the culture of the United St