The American Civil War occurred from 1861 to 1865, corresponding with the presidency of Abraham Lincoln. The war consisted of the Union (or the North) fighting against forces of the Confederate States of America (or the South).

The Union flag at the time of secession.

There are severalfactors historians can point to as causes or contributors to the Civil War, but every single one has a common denominator: slavery.

Three of the main contributors to the Civil War are the following¹:

Although the Civil War was undoubtedly about slavery, Lincoln downplayed the influence of it and claimed the war was just about preserving the Union in the beginning of the war.¹

A northern general named Ulysses S. Grant is famous for being willing to sustain enormous casualties to bring down the South. Despite losing 52,000 of his men in the Battles of the Wilderness, he was the Union’s most successful leader.¹

There were two important turning points in the Civil War¹:

It is important to note that not all of the states that held slaves were Confederate. Kentucky, Missouri, Delaware and Maryland were all critical to the Union and were also slave states.¹

There was somewhere between 680,000 to 800,000 casualties in the Civil War, making it deadlier for Americans than the American Revolution, WWI, WWII and Vietnam combined.¹ Despite this loss, the Civil War is definitely one of the most integral moments of American history. 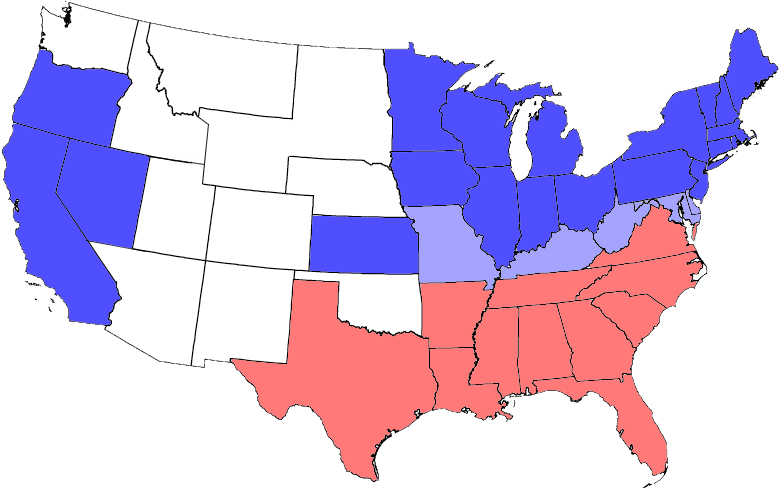 This Civil War map illustrates the Union, Confederacy states as they were in 1864. All of the blue states are Union States, the red are Confederate slave states and the light blue areUnion slave states.

Topics in Early US History

Describe the founding of European nations' first colonies in the New World. Give 2-3 examples. Explain the relationship between the expansion of British America, the decline of the Native American population in the east, and the transition from indentured servitude to race-based servitude in the period of 1660-1700.

Discuss the involvement of women's groups in Progressive-era reform movements Describe the first moves Americans made toward empire. Discuss the reasons the United States entered World War I.

Describe the formation of the early labor unions in the United States, including their goals, activities, and situations at the end of the nineteenth century.

Reconstruction and the New South:US History

Evaluate what was meant by the term New South

A Brief Overview of the Civil War Reconstruction

What was reconstruction and what were its effects on African Americans in the South?

Please help discuss the questions below: • How important were the Battle of Richmond and Battle of Gettysburg in the Civil War? • Describe the effect of each battle on the progress of the war. • What is overall importance of the Civil War and its battles?

Women and Slaves in the Civil War

Why was the Confederacy unable to secure foreign recognition and assistance to defeat the Union during the Civil War?

Reconstruction: The Growth of America

Please help me in answering the 12 questions below 1. Describe the changed world of ex-slaves after the Civil War. 2. Outline the different phases of Reconstruction, beginning with Lincoln's plan and moving through presidential Reconstruction to Congressional Reconstruction. 3. Explain how Reconstruction evolved at the

Please help understanding the following: When historians study the history of laws/legal process, it is often debatable whether laws changes as a reaction to social and cultural change or act as catalysts for social-cultural change. In "The Peculiar Institution," Foner gives an overview of legal change that relates to slavery

What issues were the most volatile between the North and South during the early years of the country?

Civil Liberties, Habeas Corpus, and the War on Terror

Hi, I need some help developing ideas for an essay I need to write, based off of the information below. Soon after the U.S. invasion of Afghanistan in 2001, the Bush administration developed a plan for holding and interrogating captured prisoners. They were sent to a prison inside a U.S. naval base at Guantanamo Bay, on land

They open a window to see the relationship between war and culture in ways that other readings just cannot - through personal experience. Our Civil War poetry is located on the web at www.civilwarpoetry.org Please read: Melville, "On the Slain at Chickamauga"; Roche, "Gettysburg"; Thompson, "The High Tide at Gettysburg"; Longfel

Major Battles of the Civil War

Select several major battles of the Civil War. Identify and explain the impact of one of the wars.

American Deaths in the Civil War

Please help answer the following question: Why was the number of soldiers killed during the United States Civil War the largest in United States History? Please include a chart comparing deaths across various American wars.

How does the Civil War define Americans? Give information of one major battefield of the Civil War, include quotes, numbers of dead and wounded, and the significance of the battle.

The Influx of Immigrants After the Civil War

Here is the question: In many ways after the divisiveness and devastation of the Civil War, the United States searched for order economically, politically, geographically, socially and racially. Select one of these areas, or suggest another, and make a case for the reasons why it was the most vital area that America needed to

Both Grant and Sherman pursued a new type of warfare. Briefly explain the change in strategy these men employed and point out a battle or campaign in which each man used their new strategy and tell if the strategy was effective or not.

You are a new 3rd-grade teacher, teaching the American history unit for the Civil War. What might be an instructional goal for that unit? Based on that goal, what would be a possible performance-based objective?

You have been given the assignment of teaching a class of 5th graders about the historical significance of the Civil War. Explain how you would do this incorporating the following 3 factors: relevance, emotions, and context. Provide specific classroom activities, and explain how each exemplifies the 3 factors.

What weaknesses existed in the South at the start of the Civil War? Were these same weaknesses present in the North? Explain thoroughly your conclusions. Whose war-making resources were greater? What strengths did the South possess?

Teaching strategies about the historical significance of the Civil War are noted.

Need some ways to incorprate teaching a fifth grade class (solid stragities) about the historical significance of the Civil War. Need help incorparating three factors such as one relevance, two emotions and three context. What type of classroom activities could be incorparated and further exemplify the three factors?

How did the Louisiana Purchase and the Mexican War contribute to the crisis that led to the Civil War?

The factors which give rise anti-slavery movement can date back to 15th century. The blacks revolted against the cruelty of their captors. The timeline of slave revolt in US was clear evidence that the roots of abolitionist movement began much before its inception. Some of the important slave revolts in early America were the

What were its successes of the Reconstruction era? Where were the missed opportunities? Also, think about the West. How has your understanding of the West changed as a result of our study?

Describe how and why the war to save the Union became the war to end slavery?

Why the North was victorious in the Civil War

Why was the North victorious in the Civil War? What were the major factors in the victory of the North over the South?