Suicide is when an individual purposefully takes their own life. It is normally characterized by depressive moods, feeling worthless and helpless, and feeling as if nothing will get better. Often the person is experiencing a mental disorder such as depression, bipolar disorder, schizophrenia, and substance abuse disorders which causes them to have these feelings. Other reasons for committing suicide could include financial problems, family and marital issues, or loss of a loved one.

According to Statistics Canada, suicide is most prevalent in those aged 40-59¹, although suicide is also very common in teenagers and the elderly due to the experience of dramatic life changes like entering college or retirement. Furthermore, most attempted suicides are by women while most completed suicides are by men². As the map below shows, suicide rates can vary based on region, which may be related to cultural differences, political differences, and the overall health and wellbeing of people from different countries. For example, suicide is more common for First Nations and Inuit people in Canada, possibly due to harsh economic conditions, lack of health and preventative services, and drug use. 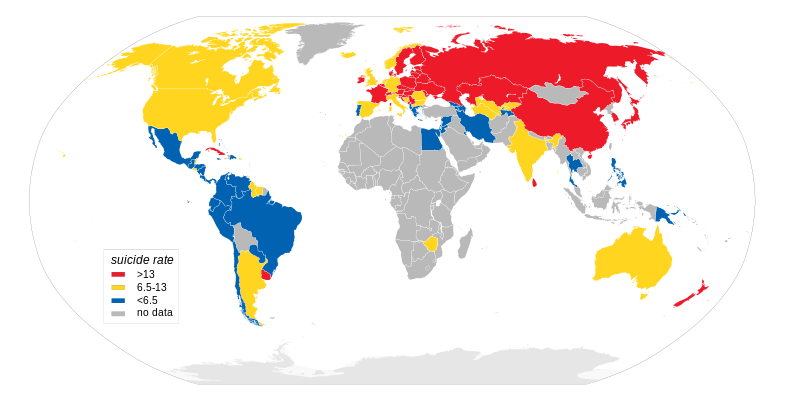 Some signs and symptoms of suicide include sudden changes in appearance, weight, or appetite. Emotional symptoms may include hopelessness, loss of enjoyment in things they once enjoyed, and personality changes, while some behavioral symptoms could be use of drugs or increased use of drugs, withdrawing from loved ones, and putting their affairs in order (i.e. giving their possessions away).

If a suicide attempt is unsuccessful or prevented, treatment can include psychotherapy to discuss the instigating problems and discover a way to cope and reduce these problems. In the case of a co-existing mental disorder, therapies and drug treatments specific to that disorder can be used in order to reduce the suicidal thoughts. If the suicide is due to excruiciating pain or symptoms from a physical disorder, medical techniques may also be used to reduce the cause of the suicidal thoughts. In all cases, a strong support system for the individual would be essential to promote their overall health and well-being.

Suicide and Homosexuality in Adolescence

Read PSYC 8781 "Axis III: Mood Disorders & Suicide" Program Transcript Do Axes I through III diagnosis of the client in the case study. Then explain your rationale for assigning these diagnoses on the basis of the DSM-IV-TR. Finally, explain whether this person is at risk for suicide and how you might assess them for suic

Please help with the following: 1. Diagnosis of the client in the case study. Transcript attached 2. Explain the rationale for assigning these diagnoses on the basis of the DSM-IV-TR. 3. Explain whether this person is at risk for suicide and how you might assess them for suicide. "Axis III: Mood Disorders & Suicide" P

Working with a Suicidal Client

Considering the psychological, biological, and sociocultural factors associated with suicide, Explain how you can determine whether or not a client is suicidal. Explain how you would treat a suicidal client, produce ongoing assessments, and follow up with the client and Explain any challenges that might occur and how you mig

Describe how you might assess an inmate for suicidality. Analyze the differences of assessing suicidality of those who are incarcerated as compared those who are not. Describe recommendations you might provide to correctional staff regarding an inmate you believe is suicidal, in order to help reduce the risk of the inmate atte

List and explain the eight suicide prevention activities that should be used in jails and what each one involves or requires. Your response should be at least 200 words in length.

While many websites are extremely informative and supportive, some contain inaccurate or insensitive information. Reviewing websites is a good way to find out what clients might encounter if they choose to seek help on the Internet. It is critical to review the information and presentation of a site before recommending it to a

Here is the following scenario: You are treating a 45-year-old male who states that he is depressed and potentially suicidal. Your client has recently returned from active duty in a war zone and states that he does not know if he can go on after seeing the things he has seen during war. His drinking has increased significantly o

Using SLAP assessment what is the current level of risk? - From the solution focused perspective: what 3 questions should be asked and why? - What questions might you use from the Suicide Resilience Inventory by Rutter, et, al.? - What does the research say about suicide contracts and safety plans? Case: Lupita is a 16 ye

A crisis intervention strategy for an African American individual

What are some potential challenges in the treatment of a patient who wants to end their life with assisted suicide?

The Ramifications of Euthanasia

At the end of chapter seven the text raises the issue of "Right to Die." Given the issues of depression and suicide prevention (or intervention) what is your stance on this issue. Do people have a right to die? Under what circumstances, if any, might a person exercise such a right? Is a severely depressed person able to competen

Investigate the laws and rules of crisis assessment and hospitalization in the State and Community of Georgia. Can tell how you would have a client hospitalized if you were in an outpatient setting or at a home visit and determined that the client was at a high risk of suicide or homicide or was unable to care for himself or her

A high school sophomore has been found lying on the floor of a restroom at school. She has significant cuts on her wrists and is bleeding. A teacher was alerted by the girl who found the student. The teacher called 911, and the ambulance arrived and took the student to the hospital. 1. Indicate how and why you think they may

What are the risk factors of suicide and what are some common interventions?

My classmate wrote: "I was stunned to read that in children between the ages of 10 and 14, suicide rates are the seventh leading cause of death and have "increased 70% since 1981" (Butcher, Mineka & Hooley, 2010, p. 263). In adolescents between 15 and 19, it is the third leading cause of death; not to mention suicide attempts w

I am also a big believer in the healing nature of time. I think once we live long enough, we all realize that the saying "this too will pass" is dead on. The thing that makes us anxious and disturbs us today usually fades fairly quickly. The problem with adolescents is that so much of their behavior is impulsive and/or sociall

There is an old diagnostic category referred to as "smiling depression" that may have some relevance here. There are certainly those people who do not show depressed moods at all, either because they are just that way or are consciously trying to hide depression. Based on this and the other posts, doesn't it seem very probable t

What are the purposes of a psychological autopsy? Can this tool be useful in assessing risk for suicide?

Use the Internet, university Library, or other resources to locate a current article related to suicide. Read the article and Write a short summary of its main points as a response to this message. Do not forget to include reference information for your article.

Resources: Appendix E and the Suicide Rates by Age Group article. Review the Electronic Reserve Readings for Week Three, located on the student web page. Please see the attachment and answer the questions in Appendix E. QUESTIONS: Suicide Respond to the following based on the information in the "Suicide Rates by Ag

Suicide rates vary widely from country to country. What factors besides religion might help account for the differences? Resources are listed.

Can taking antidepressants lead to suicide?

Do you think that taking antidepressants lead to suicide?

Many people at some time in their lives think about committing suicide. Most decide to live, because they eventually come to realize that the crisis is temporary and death is permanent. On other hand, people having a crisis sometimes perceive their dilemma as inescapable and feel an utter loss of control. How can someone assist