While the older generation can still develop any of the other psychological disorders like depression and anxiety, some disorders, including dementia, delirium, and amnesia, tend to first occur in old age. 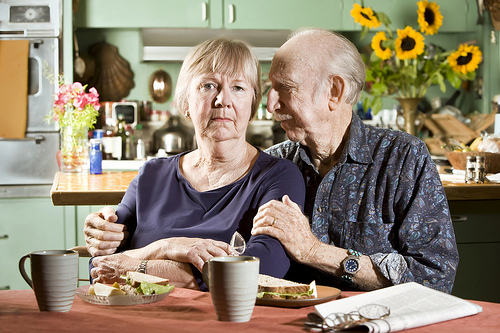 Dementia, which can be caused in older age due to damage from a head injury or stroke or from a disease like Alzheimer's, involves a deterioration in cognitive processes like the ability to think and speak. It continually gets worse as the person ages, and often involves the person forgetting things such as their loved one's name, and eventually they may be unable to recognize anyone they once knew or even objects (agnosia). They may also have issues with speaking (aphasia), completing certain actions (apraxia), and complex behaviors (executive functions).

A disorder that is similar to dementia is delirium, which involves periods of confusion and change in behavior, such as sudden aggression, changes in sleep patterns, disruptions in memory, personality changes, and disorganized thinking. However, unlike dementia, delirium tends to be treatable and the individual can go back to normal functioning with the use of medications that can treat the underlying problem, which can be due to anemia, kidney or liver failure, thyroid disorders, or other mental disorders.

Unlike both dementia and delirium, amnesia results only in memory loss. The loss can be for new information (anterograde amnesia) or for past memories (retrograde amnesia). Some causes of amnesia are brain injury or stroke, substance use, or malnutrition. The amnesia may be reversible in some cases, and can be treated by treating the brain injury or whatever the underlying cause of the amnesia is.

In later life, with drastic changes like retirement or death of loved ones, the elderly may develop depression, anxiety and substance use disorders. These disorders must be taken seriously and not just thought of as a result of getting older. With appropriate treatment, the older population can live happily for the remainder of their lives.

Disorganized thinking, memory loss, and changes in sleep pattern and behavior are symptoms of delirium.

Issues surrounding use of balance sheet in mental health setting

Changes in lifestyle that can help the aging process

What changes in your current lifestyle might help you age more successfully when you become an older adult?

See the attached file. Imagine you are the head of a local, non-profit, substance abuse treatment facility and you have just received a grant that will allow you to expand the different types of treatment offered at your facility. You have the option of either hiring a psychoanalytic therapist, a cognitive behavioral therapis

Aging of the brain and adult development.

Please help with the following problem. Discuss the meaning of the shrinking, slowing brain and the adapting brain as they relate to adult development. Cite your sources with APA format.

The Aging Brain: The Nun Study

A) It is a fact that some life-span experts argue that biological aging begins at birth. Using the biological theories of aging as background, which are (1) Evolutionary Theory, (2) Cellular Clock Theory, (3) Free-Radical Theory, (4) Mitochondrial Theory, and (5) Hormonal Stress. Describe how each of these five theories explains

Technology is in everybody's life now. With advancements, the electronic devices are becoming more sophisticated. They are smaller, lighter, and have multiple functions (e.g., the Smart Phones). In what aspects do these devices challenge the aging population? If you work as an Industrial-Organization psychologist to give advice

With the rise of dementia, delirium, and Alzheimer's, do you believe that getting older is equal to mental decline? Why or why not?

This psychology topic is focused on coceptual approaches to learning and performance.

Describe the concept of learning. Distinguish between learning and performance. Compare and contrast the conceptual approaches to the study of learning. A minimum of three scholarly sources is required for this assignment.

Implications for Implicit Learning and the Elderly

Implicit learning is described as acquiring knowledge through exposure; learning about things unintentionally and indirectly. Is implicit learning still possible in the elderly? If so, how might this type of learning be beneficial?

Proposal for an elderly support group.

With the many issues in the elderly population, the helping field could form a support group to address an issues affecting this population. What organization might request such a group. Describe the group you are proposing, indicating the need that it would address. Identify the goals of the group, as well as strategies and

Choose a theory we have learned about thus far in this course. (clinical, experimental, correlational or person-centered approach) Analyze how personality changes throughout life from your chosen theoryâ??s perspective. Answer the following questions: What type of specialized training might counselors need to address the cl

The Five Stages of Death and Dying

This is an examination of the ways in which our society and other societies or subcultures handle the fundamental issue of death. The following subtopics are to be addressed: Subtopic 1: explain the stages of death and dying Subtopic 2: analyze the process of grief and mourning Subtopic 3: discuss the role of the funeral

Rebutted Myth of Aging and a Decrease in Sex Drive

Extracting pertinent info regarding aging and sexuality; from the angle that it is a myth that lost interest in sex occurs simply because one is 50+ years old. Using the key-points from the article attached.

What life changes has this woman experienced? What impact-physical and/or psychological-might you expect these changes to have had on the woman's life? If you were the therapist to whom this woman was speaking, how might you respond to her assertion that there is nothing that you can do to help her? As a Christian counselor how might you view this woman and her problem? Are there any Christian interventions that you believe might help this woman?

This relates to mental illnesses that go along with it (GAD, PD, PTSD, OCD, etc.). The script is as follows: The lady in the video is 70ish, well dressed, but spoke in a expressionless monotone fashion. She never uncrossed her arms. Any ideas would be appreciated. Mrs. Williams: I can't see how you can help me in my situa

Free thinkers and looked at the world from a different perspective

Philosophers and scientists of old were free thinkers and looked at the world from a different perspective (like thinking the Earth moved around the Sun and not vice versa). Those were very unpopular ideas. Do you think we incorporate that kind of initiative in psychology today? How so?

Mental health is such a major factor in living full healthy lives. Give 3 mental health concerns that may help or hinder graceful transitions to old age, how do these problems evolve? Are they inherited, socially, learned, or a combination of both explain.

1. In 2006 the first wave of baby boomers reached age 60. 2. The most cited reason for disability in older people is arthritis ( Verbruge, 1994) 3. Demtias are mental disorders caused by mild organic deterioration of the brain. 4. The first practitioners of social gerontology were developmental psychologists,