Protestantism grew out of the Reformation, a movement of separation from the Catholic Church.  In modern times it generally refers to the 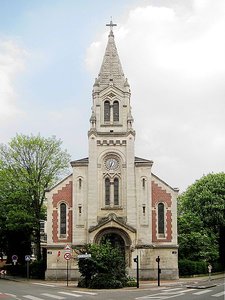 branches of Western Christianity other than that of the Roman Catholic Church.¹ Martin Luther, a Catholic priest and monk in Germany, sent his Ninety-Five Theses to Catholic authorities in 1517 AD, identifying and protesting against what he believed to be errors in the practices of the Catholic Church.  He believed that the Church was no longer following the word of God given in the Bible.¹

For I am not ashamed of the gospel, for it is the power of God for salvation to everyone who believes, to the Jew first and also to the Greek. For in it the righteousness of God is revealed from faith for faith, as it is written, “The righteous shall live by faith.” Romans 1:16-17

The Reformers established several splinter churches after the split with the Roman Catholic Church: in Germany, Lutheranism, in England, the Church of England (Anglican).¹ Protestant churches are divided into denominations based on their specific beliefs and applications of scripture (the Bible). Common denominations include Anglican, Baptist, Congregational, Lutheranism, Methodism, Presbyterianism, Reformed, and Anabaptists (a Radical Reformation denomination).¹

There are several commonalities between traditional protestant denominations¹:

A significant difference between protestant denominations is their beliefs of the Eucharist (Holy Communion or the Lord’s Supper).  Radical reform churches further believe in adult baptism, as opposed to infant baptism.¹ Nontrinitarian denominations do not believe in the doctrine of the Trinity and Restorationalists include Mormons, Adventists, and Jehovah’s Witnesses.¹

Fear of God and Conscience

The Ancient Hebrews had their own understanding of the "Fear of God" and the role that conscience played in exercising it wisely. So did the Puritans. Some say the Puritans really understood this concept of the Fear of God, better than any other group either in or outside Scripture. Is this correct? Just how similar could the tw

What exactly, is the message of the "Good News" and why was it so revolutionary? Is an understanding of its meaning essential for understanding world history since the life and death of Jesus Christ? Why or why not? Why exactly was it important for early "Nicene" Christianity to get clear on what was essential for faith? Do y

Conscience and fear of God.

Grace: 1.) I am told that the Puritans really understood the Fear of God & Conscience. Why? In His Service, MVE

Puritanism and The Fear of God

Michael: 1.) I am told that the Puritans really understood the Fear of God & Conscience. Why? In His Service, MVE

Please provide critical reflections upon Howard Thurman's strengths, limitations, and weaknesses relative to the topic of liberation? How can Howard be challenged in his thoughts regarding liberation?

How do Christians understand tithing?

An Explanation of Christian Ethics

How would a Pastor or leader (lay or professional) inform a congregation about how ethical decisions are made and what criteria would be used to determine if those ethical decisions contradict other commandments of scripture?

Attached is an excerpt from the book Four Views of Divine Providence, Chapter 4: God Limits His Control; (Heading) The Open Model of Providence, (Sub-heading) Love and Freedom; contributed by Gregory A. Boyd. There are three other contributors in this book and they each state their positions and defend them as necessary. Boyd

Author and seminary professor John S. Feinberg states that "Naturalistic evolutionists claim that the origin and development of the universe can be explained in entirely natural terms in virtue of purely natural laws operating over natural phenomena. Feinberg quotes Richard Dawkins who said, "Darwin made it possible to be an int

Michael: I have been listening to both podcasts and reading Wayne Grudem's book Systematic Theology on my own. I am intrigued with the Doctrine of the Independence of God. I am filling the pulpit on occasion with a local church and I want to put a sermon together on this theme of God's Independence. I have all the text book i

In Kevin J. Vanhoozer's (Editor) book Nothing Greater, Nothing Better: Theological Essays on the Love of God; Dr. Tony Lane of London Bible College writes about the neglect of the wrath of God. Lane makes the statement saying "We need not balance God's wrath with his love, as rival attributes, but because God's love itself impli

1) Is it accurate to say that some people (both nominal Christians and professing Christians) believe that they can have a relationship with the Father directly without going through Christ first utilizing the Holy Spirit? 2) How can this be applied to a believer's Personal, Practical, and Ministry Work?

The Role of Providence

1.) What is the difference, if any, between Old Testament and New Testament divine providence? 2.) How can this be applied to a believer's Personal, Practical, and Ministry Work?

God's Transcendance & Personhood as it Applies to Personal

Statement: It is within the context of God's transcendence and person-hood of His attributes that are to be seen. The attributes of God are not merely philosophical conceptions they are realities that have to do with our personal and transcendent God. What is truly important is His self-revelation and how he has chosen to reveal

Transcendence and Faith in Daily Life

How could one apply or reflect the Transcendence and Immanence of God on: 1) Their Personal view and relationship with God? 2) Their Practical Life or Work? 3) Their Ministry Work?

I believe baptism and the Lord's Supper are sacraments not just ordinances. R.C. Sproul states that "Though Protestants recognize other rites such as marriage as special ordinances, they are not recognized as attaining the level of sacraments. Sacraments are limited to: (1) those ordinances directly instituted by Christ, (2)

Relationship of Jesus Christ, to the Holy Spirit and the oneness of God

St. Gregory of Nazianzus provides an ancient perspective of the theological explanation for the relationship of Jesus Christ and the Holy Spirit to the Oneness of God as taught in the Old Testament. Modern writers like Gordon Fee in his book Paul, the Spirit, and the People of God suggests that the Apostle Paul was less interest

Made in God's Image

Is there a tie or relationship between prophecy and Biblical inerrancy. Please provide me your brief insight to this subject? Perhaps some scriptural reference and other published references.

Understanding Why the Bible Is Inerrant

My church believe that the Bible is the inspired, inerrant, infallible word of God. Please help me better understand why the Bible is specifically inerrant and how you would defend that. In addition to the Bible claiming that it is inerrant, who else in the Reformed "camp" does a good job explaining this? Please point me to thei

Systematics: Relevance and Relation to Other Theologies

After speaking with several Christian friends about their evangelism experiences they told me that "dealing with lost people will cause us to get our hands dirty and sweaty just like tending to yard work. I believe that part of evangelism is to clear up misconceptions and misperceptions people have about the gospel. I am learnin

Please respond with relatively short answers. 1.) In regards to Bible interpretation or hermeneutics what's the difference between "meaning" and "application?" 2.) What are some basic steps to apply the meaning or principle of a text. 3.) What are some mistakes to avoid? 3.) If we look at 1 Timothy 6:10a, what woul

I am looking for relatively short responses to my below questions. 1.) How can I best explain to my interested friends the difference between "reader response" and "authorial intent"? 2.) Why is the issue of communication important to the the discussion of authorial intent? 3.) Who controls the meaning in interpretatio

After having a great conversation with some friends in regards to interpreting Scripture I came away with a series of questions: 1.) How important is "literary context" to understanding the Bible properly? 2.) What are several principles that I could use to guide me in my practice of interpretation? 3.) What is the di

Based on her life and religious experiences (autobiography). What do these aspects tell one about race and gender in early nineteenth-Century America?

Based upon a map of Jesus' movement according to the gospel of John, what can be seen and learned about John in the process?

I need some help with research into the history of Pentecostalism and the 20th century development. Along with the Azusa Street Revival, since this is a key event for Pentecostalism.

4. What are the unique differences between the various Protestant Denominations? a. Baptists b. Methodists c. Lutherans d. Presbyterians e. Episcopalians f. Quakers