“Ancient art refers to the many types of art produced by the advanced cultures of ancient societies with some form of writing, such as those of ancient China, India, Mesopotamia, Persia, Israel, Egypt, Greece and Rome.”1 The art of pre-literate societies is usually referred to as Prehistoric art. Although some Pre-Columbian cultures developed writing during the centuries before the arrival of Europeans, these works of art are referred to as Pre-Columbian art. 2

Much of the artwork of the ancient world is often found in the form of sculptures, jewellery, coins, weapons, architecture, vases and pottery, carved gems, glass, musical instruments, and mosaics.2

The late Middle Ages saw many advances in art, including brighter colours, massive sculptures, metal work, stained glass windows, a move towards realism, and the use of shadows and light. These advances became known as the gothic art style. Donatello, although considered an early Renaissance artist, began his career at the end of the medieval art era and quickly perfected the gothic art style as a young man.<a href="#2>2

Gothic architecture also flourished in the medieval era. Many cathedrals, abbeys, churches, castles, and palaces in Europe display the pointed arch and ribbed vaults of the gothic period, such as the Notre Dame in Paris. 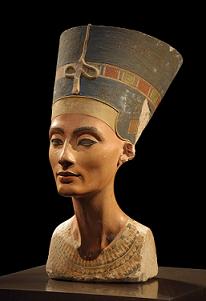 Image Credit: [WikimediaCommons.org]
Bust of Nefertiti (1345 BC) by Thutmose. This is an ancient work of art.

Image Credit: [WikimediaCommons.org]
The Effects of Good Government (1338) by Ambrogio Lorenzetti. This is a fresco in the City Hall of Siena.

Alexander Mosaic and the Olympia Hermes with Infant Dionysos

I need an artwork analysis criteria. This analysis should be formatted as stated below. Analysis #1 - The Alexander Mosaic Analysis #2 - Olympia Hermes with Infant Dionysos Categorization: Artist name, Title, Date, Medium,Size, Current location Environmental Influences: How do the following influence the subject of the artwo

This solution answers the question of how art from the early Middle Ages incorporates both pagan and Christian styles, using the hoard from the Sutton Hoo burial mound as a specific example. Because the student specified a Year 1 study level, the solution is framed as a beginner's approach, 1.) explaining how pagan and Christian

Art in the Aztec Civilization

Using three specific examples (works of art, architecture, music, or literature), express what the art says about the people who created it. Use the Aztec Civilization as the subject.

How does the Parthenon represent the culmination of Doric temple design, and how is it the ideal solution of the Greek architect's quest for perfect proportions? Use examples to support, At least 200 words.

List some of the Ancient Greek beliefs about the human body and figural representation. Give one or two examples of how this is evidenced in art production. Are any of these concepts continued today in our society? 50 word or more

Compare these two works of art using the criteria listed below. 1. Greek Art: The Doryphoros (Polykleitos, 450 BCE) 2. Roman Art: Augustus of Primaporta (c. 20 BCE) Answer the following list of questions (with expansion) to evaluate your choices. Be sure to introduce the works you have chosen. - What is the form of t

Impact of Trade Between Egypt and Knossos

Discuss the impact of trade between Egypt and Knossos. How did this trade affect the art of the Aegean? Use examples to support your statements.

Comparing the Temple of Athena to the Coliseum

A compare and describe the history of the Temple of Athena and the Coliseum. When comparing these two structures, consider as many aspects that you can think of to perform a full and thorough comparison.

Paper topic: culture Greek I need help figuring out why the visual arts developed in this culture the way they did. Also need help with a thesis and introduction that deal with three types of media that were used during this time period. It would be early Greek art and Myth.

Pick a Greek Myth from a reputable online source and tell how you would represent it (relief sculpture, freestanding sculpture, vase painting).

What do you think was the purpose of having this combination of visual elements (the Doric Order) in Greek architecture? Why have a standardization for architecture and ornamentation?

Ancient Egyptian artwork examples are given.

Details: In this assignment, you will be helping to design a chapter on ancient art forms and designs. In particular, you are to research ancient Egyptian culture. Pick at least two pieces of Egyptian artwork and discuss some of the design principles (e.g., proportion, depth, media, and value) the Egyptians used in their paintin

Details: In this assignment, you will be helping to design a chapter on ancient art forms and designs. In particular, you are to research ancient Egyptian culture. Pick at least two pieces of Egyptian artwork and discuss some of the design principles (e.g., proportion, depth, media, and value) the Egyptians used in their paintin

Help is given with an Egyptian Art overview.

Details: For this assignment, you will create an Egyptian style art piece (this can be a drawing or software based rendering) and answer the following questions: ? For who was the artwork created? ? What was its value in the culture?

Select a single piece of sculpture that you believe best reflects the stylistic principles of Greek art from the Classical period (Early, High, or Late). Describe briefly the principles of the period and how the work reflects them. Be sure to fully cite and indicate the sculpture you choose.

Notes on canon of representation serve for the ancient Egyptians

What purpose did the canon of representation serve for the ancient Egyptians, and why was it important?

Impact of trade between Egypt and Knossos

Discuss the impact of trade between Egypt and Knossos. How did this trade affect the art of the Aegean? Use examples to support your essay

What do you know about Classical Antiquity Roman Art (800 BCE to 400 CE) Religious Paintings?

Please compare and contrast these three works of art Notre Dame, Wells, and Salisbury Cathedrals, all are from the gothic (medieval period). Please discuss materials used, style, meaning, symbolism, and any other aesthetic issues concerning the art you have chosen. Explain how the works of art fit into the context of the time p

Compare and contrast the Romanesque and Gothic architectural styles

Please help with the following problem. Include at least 300 words with references. Briefly compare and contrast the Romanesque and Gothic architectural styles with regard to their social and religious environments. Give examples.

On June 11, 1144, Abbot Suger presided at the dedication of the royal Abbey church of St. Denis, Paris. This momentous occasion, attended by King Louis Vii of France and his Queen, Eleanor of Aquitaine, sparked a frenzy of Gothic construction in the Ile de France. Discuss the role that Abbot Suger played in the creation of the G

Roman architecture was both inventive and derivative. How is the Roman temple related to both Greek and Etruscan designs? What specific aspects are uniquely Roman?

Please help with the following art history problem. Provide at least 300 words in the solution. What are some of the problems that we encounter in attempting to define Roman Art? How are these problems uniquely related to Roman attitudes toward the Greek civilization?

The prominent features of the Doric and Ionic orders of Greek architecture are identified, such as the Doric order is the simplest column with no ornamentation at the top. The Ionic order has slightly more elaborate decorations at the top and bottom of each column. In the Doric Order, the abacus is undecorated; in the Ionic, th

Visit the following websites and explore the collections of Ancient Art there: - The Metropolitan Museum of Art - The Louvre Museum - The Smithsonian Institution Freer Gallery and Sackler Gallery From the gallery websites listed above, select two works of art from any ancient culture. Using the terminology and concepts

The Art and Architecture of Ancient Egypt

Because ancient Egypt was not a land susceptible to constant invasion and change, a style of art and architecture was begun, developed, and maintained with limited change for over 3000 years. Especially in viewing their accomplishments in the field of architecture, some individuals have been so impressed that they have suggested

Geography: political and/or religious in nature

2. Find two clearly identified items that are political and/or religious in nature. Try to find the meaning and symbolism in the works and describe them in detail. How are they Egyptian? What beliefs do they represent? This is an exercise in researching meaning in art. Example: the pyramids at Giza are on the western ban