Terrorism is a use of violence for selfish or political purposes. The 2001 incident of 9-11 is a prime example of terrorism. Often times 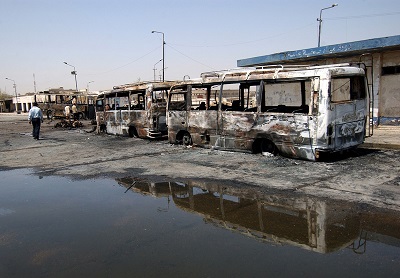 terrorism is performed by non-state actors and achieves their agenda through coercion and intimidation. Acts of terrorism are unlawful, destructive and illegitimate. There are a few types of terrorism, namely civil disorder, political terrorism, and official/state terrorism. Civil disorder is a form of violence that creates fear within a community and hinders peace and security. Political terrorism is violent behaviour that seeks to intimidate and threaten in order to achieve a specific political purpose. State terrorism involves nations that rule through intimidation, fear and violence. Non-state actors are agents who are not affiliated with any sovereign state and are therefore under no authority other than their own. These non-state actors act within the international sphere, but it is hard to trace them or make them accountable. This the primary issue with international security against terrorism.

International security as a concept has seen a large evolution of ideas. Traditionally, international security has revolved around protecting the state. This follows the theory that the protection of the citizens will follow as long as the state is protected. This theory found its height in the Cold War. But, since then, many different approaches have arisen including: classical realism, neorealism, economic liberalism, and liberal institutionalism. It is important to remember that military protection is not the only concern of international security. For example, economic security is just as important.

Congressional action on cybersecurity would send strong message to China, By H. West Richards, Oct 5, 2015 http://thehill.com/blogs/congress-blog/technology/255716-congressional-action-on-cybersecurity-would-send-strong Congress Wants Companies Facing Cyberattacks to Share Data, and It's Not a Moment Too Soon, By Paul Kurt

Traditional and nontraditional threats to security

May I please have a few assessment and predictions of the following: --Traditional and Nontraditional threats to national and international security. Articles of reference would be helpful, as well. Thank you so much for your willingness and support.

Select 3 articles that describe, examine, or explain ideologies and motivations of terrorist organizations. You may select any article from a scholarly source. Assignment Guidelines In 100-150 words each, describe what each of the 3 articles is about. Then, summarize their findings. In what ways ( be specific) is the conte

Cameras in the Courtroom

Topic: "The Use of Videotapes and Cameras in the Courtroom and the Jury Deliberation Room"

1.) Select a judge currently serving on the courts and research your selected judge. Conduct your research using sources such as the Internet or the library. Make sure that you research the following issues: The background and education of the judge. How the judge was selected for the court in which he or she presides. The tr

1.) The idea of stare decisis, which is rooted in common law, is one of the key concepts for our current legal system. What do you believe are the pros and cons of this concept of precedent? 2.) What relationship does the exclusionary rule have with the rule of tainted fruit? Do you agree with these rules? Why or Why not?

China, Indonesia, Philippines, Malaysia, and Australia and the rise of terrorism

1.) Explain how the People's Republic of China has managed to control the spread of terrorism within their borders. Has the Chinese Government attempted to control religious groups? Have they been successful? Why or why not? (200 Words) 2.) Will the spread of Islamic extremism have any substantial effect on the people of Aust

1.) Discuss how the rise of Islamic militants from the region and other areas of the Middle East continue to destabilize Nigeria, Ethiopia, Somalia and the horn of Africa. (200 words) 2.) Discuss why oil rich African states suffer from internal terrorist attacks. Examine the failed states that are ripe for exploitation by Isl

1.) Examine the career of Yasser Arafat as a leader of the PLO, and his contributions to, or against, peace with Israel and where the PLO now stands in the region. (200 Words) 2.) What are some of the reasons that many Palestinians support Hamas? Discuss the success and failure of Middle East suicide bombing campaigns. What

1.) Does the presence of Hezbollah and al Qaeda in Turkey pose a significant threat to other European countries? (200 words) 2.) Discuss the reasons for genocide in the Kosovo region at the breakup of Yugoslavia and the status of former leadership in those provinces. Do you think this type of genocide is possible in other p

Discuss contemporary security challenges for the 21st Century that face the United States and other industrialized nations. List examples of federal regulations and HSPDs that were implemented to deter and prevent attacks against the U.S. Assess whether the current statutory and presidential directives provide the needed

Domestic terrorism is not a new phenomenon; however, law enforcement organizations appear to be facing a multifaceted domestic threat in the forms of Lone Wolf terrorism, special-interest terror groups, and radicalized persons. Briefly describe each of these groups, as well as their current and historic motivations, providing ex

The History of Terrorism

Challenges Facing the Security Industry in the 21st Century

Technology, Private Security Industry, and the War on Terror

Failure of the US Intelligence Community at 9/11