PTSD is caused by a psychologically traumatic event. This type of event typically involves actual or threatened death or serious injury. These triggers can include violent personal assaults, serious accidents, military combat, natural disasters or witnessing someone be seriously harmed or killed.

The symptoms of PTSD typically begin ~3 months after the traumatic event in question. Although this is usually the case, the onset can actually surface years later. 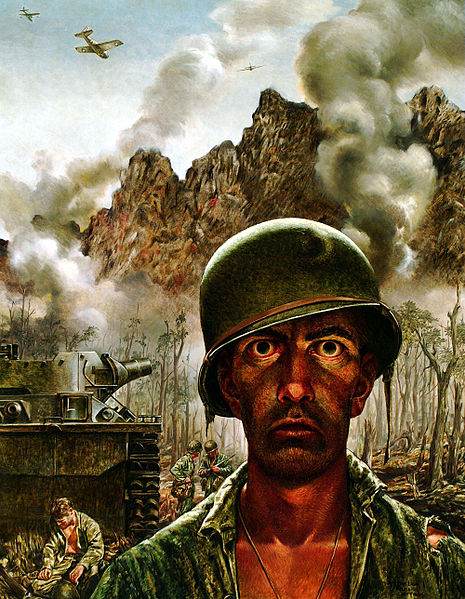 It is very common for those who suffer from PTSD to have powerful and recurring memories, nightmares or flashbacks in which they are forced to relive the traumatic experience.

2. Avoidant/numbing systems (e.g., feeling detached from others, not having feelings for people you previously had feelings for, or inability to recall events of trauma).

Avoidance occurs when sufferers actively avoid scenarios that may remind them of their distressing experiences. Emotional numbing actually occurs very soon after the initial event, causing someone to withdraw from loved ones and have difficulty feeling emotions.

Insomnia is common in those who have PTSD. Many experience increased aggression and in rare cases, dissociative states.

PTSD is often treated with a mixture of medication and cognitive-behavioural therapy (CBT). The medication can help an individual control the depression and anxiety associated with PTSD and regulate their sleep patterns. CBT and exposure therapy help in weakening the grip the traumatic event has over an individual’s life.

There are many new and experimental treatments that are in trial or have emerged in the last 5 years. Here is an excellent example of new techonology being used to treat veterans who suffer from PTSD. This lab in Kingston is using biofeedback to retrain individual's brains to avoid using frequencies that trigger symptoms.

This solution describes the most effective treatment approaches for Post-Traumatic Stress Disorder in adults.

Can you research three articles on career issues of military personnel and their families? Some of these issues will be consistent with any career client. However, they may also include "stacking" of multiple issues: -identifying career options after the military combined with depression, post-traumatic stress syndrome, disabi

I'm looking to expand on my assignment with the use and success on Autobiographical memory tests (AMT) and PTSD. Thoughts or comments welcome. I'm expanding on any information provided to the tune of an 8 page requirement.

1) What is the anxiety disorder that is caused by some traumatic event? Sexual abuse and assault victims are considered by some to be the single largest group of sufferers. Onset of symptoms can occur immediately or can be substantially delayed. The course of symptoms is often marked by periods of recurrence and remission. Th

Could you please do an "objective" conversational response on how this person has done on their discussion on Meta-Analysis article? Your expert objective response should contribute thoughtful, unique and interesting information to add to their discussion. The article that I chose to work with is the meta-analysis resear

What are some factors that make a community strong after a natural disaster?

-Can you help with a detailed review and analysis of the evaluation process, including use of the DSM-IV-TR to determine if an individual has a stress reaction that can be diagnosed as acute stress disorder or PTSD? -Why might it be important to assess for PTSD when working with a client who has been through a traumatic experi

A intervention program for adolescent refugees from Nigeria that have been exposed to terrible violence such as murder and sexual assault. An exploration of PTSD and psychological effects and interventions such as forgiveness and reconciliation. In Africa, after the ethnic genocide in Rwanda, there were truth and reconciliatio

The causes of post-traumatic stress disorder

My cousin got post-traumatic stress disorder (PTSD) as an adult. Most of it was blamed on his childhood issues that were unresolved. I think that if there are issues that are severe and they are never dealt with then they could cause PTSD. Do you think that a child that was raised by terrible parents could have PTSD? Cite

Cognitive Restructuring on a PTSD Patient

Case: Jacob Taylor recently separated from the U.S. Army after serving eight years as infantryman with three deployments to Iraq and Afghanistan. While he suffered no physical injuries, he did encounter a multitude of horrific sights to include several fire fights while on patrol and improvised explosive device (IED) detonati

Assignment on the analysis of Post-Traumatic Stress Disorder (PTSD) in relation to its affects on children (this information can easily by modified to apply to adults as well). [NOTE: A student submitted the following information regarding PTSD and asked what else should be discussed about the disorder as it relates to childr

Post-Traumatic Stress Disorder (PTSD)-is a disorder where victims suffer from hallucinations both visual and auditory thinking that they are back in the same traumatic situations. It can occur at any time that a loud noise or event makes them think of a particular event.

Can you please help me with a short description of PTSD for a research paper? Post-traumatic stress syndrome not only affects the individual person but also the immediate family and their lives. For example when at a son's or daughter's track meet when the starter's pistol goes off so could the father's flashbacks could happ

Give an explanation of how the presentation of PTSD for active duty military might be complicated by military experience. Then describe how PTSD might influence a military client's transition into civilian life.explain how PTSD of military clients may affect their significant relationships.

1. What three most important consideration related to sampling that I would need to test PTSD? 2. How can I ensure my sample represents the PTSD population?

effects of CBT techniques to assist clients with PTSD

Persistent stress often leads to impaired performance and stress-related health problems, sometimes lingering even after the stressor has been terminated. Post-traumatic stress disorder (PTSD) is one of the most dramatic examples of the aftereffects of stress. You have been asked to prepare a brief presentation on PT

Veterans who are diagnose with PTSD as they enter back

How do I formulate and write an abstract on veterans with PTSD in the work place, before I write a paper on the subject

Please help with the following problem. Discuss the relationship between human development and socialization and how this relationship is affected by Post Traumatic Stress Disorder. Include cultural implications as well.

Lauren is describing going through a range of emotions following the September 11 attacks. As a result of her intense emotions, she is able to recall the even very clearly. Lets apply this to a clinical situation. How could the impact that emotions have on memory affect a client who is experiencing PTSD (posttraumatic stress

Please distinguish between remembering events and information or messages. To talk about events, such as the recent tragedy in Japan, it is true that we are not present to experience it first-hand. Is it still possible to experience trauma as a result of something occurring so far away? If so, how is that possible. Please explai

Discuss post traumatic stress syndrome as an example of a military mental health stigma. I have attached your response which consists of 11 pages (13 with references), 2954 words and 14 references

Generally when we hear about PTSD we tend to think of it as applying only to someone in the military who has seen war and mas devastation. I know for me I hadn't heard of it used in any other term or used under any other circumstance. But in actuality anyone who has experienced a traumatic event and lived through can suffer fr

After reading the article in this attachment, what did you think of the article and how post-traumatic stress disorder plays a big part in all our life's? And what did you find that was most interesting about it?