Any symptoms that suggest a physical illness but seem to have no medical cause can be categorized as a somatoform disorder. An example could be someone that has extreme pain in their back with tests showing nothing wrong with it, or an individual who is unable to move their right arm for no apparent reason, neither medical or caused by substance use or other mental disorder.

Unfortunately, because the disorder presents as a physical illness, individuals suffering from somatoform disorders may become fixated on their health problems and experience great anxiety and distress over the fact that doctors can't seem to find what's wrong. This may even promote heightened sensations that could exacerbate the problem.

The somatoform disorders consist of conversion disorder, somatization and pain disorders, hypochondria, and body dysmorphic disorder. Conversion disorder involves symptoms of a neurological disorder, such as paralysis or blindness, with no medical explanation (often thought to be caused by excessive anxiety), while somatization disorder often includes feelings of pain or other bodily symptoms and occurs in an individual with an extensive medical history prior to the age of 30. Pain is the symptom most prevalent in pain disorders, and is thought to occur after a traumatic experience, and hypochondria involves individuals who believe they have a disease when tests show they do not, such as someone who thinks they have a brain tumor because of a headache. Lastly, body dysmorphic disorders are characterized by obsessing over a physical aspect of their own body (real or imagined), often exaggerating it. For example, someone might think a small mole on their skin is so hideous that they work to cover it up constantly throughout the day or always wear clothes that hide it. 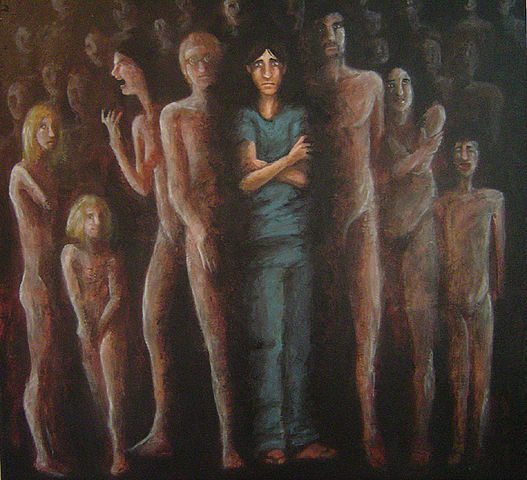 Dissociative identity disorder, which used to be referred to as multiple personality disorder, involves the existence of two or more personalities within an individual. They may seem to switch between these separate personalities, especially when under stress, which will often have their own name and attributes including voice and behavioral characteristics. Dissociative amnesia is often co-occurent with dissociative identity disorder, and includes lack of memory for a specific event, person, or even for a long-span of their life. On the other hand, dissociative fugue occurs when someone suddenly seems to forget their identity and life, and will often develop a new identity for themselves and when they recover have no recollection of their fugue state. Lastly, depersonalization disorder involves a person who feels detached from their life, emotions, thoughts, and identity.

Somatoform disorders can often be treated through cognitive-behavior therapy and methods of lifestyle changes to reduce stress, while dissociative disorders improve most through talk therapy, hypnosis, and guided imagery.

I need a diagnosis for the female in the case study: client: No one understands. It's so hard being on my own and taking care of myself. FEMALE SPEAKER: I know it must be hard. And how long has it been since your husband passed away? CLIENT: It's been five years. And we used to do everything together. And now--I wasn't

How hypochondriasis is influenced by the legal system

Discusses how Hypochondriasis is influenced by the legal system

Review the media The Vignette of Richard. For this discussion, address the following: 1.Describe what somatic symptom diagnosis you would consider giving to Richard. If you need more information to be sure of a diagnostic choice, list the additional questions you would ask. 2.Describe some of the treatment goals you would

When a client presents physical ailments for which no medical evidence confirms a condition, the client's pain may not simply go away. Rather, the pain may persist, further disrupting the client's life. In these cases, psychological evaluations may be used to determine if any psychological disorders exist. Specifically, somatofo

Somatoform, Factitious, and Dissociative Disorders When a client presents physical ailments for which no medical evidence confirms a condition, the client's pain may not simply go away. Rather, the pain may persist, further disrupting the client's life. In these cases, psychological evaluations may be used to determine if any

Choose a disorder briefly describe it and then discuss how it can be treated, cured or managed. You may choose between: OCD, PTSD, GAD, DID.

There are four dissociative disorders: Dissociative Amnesia, Dissociative Fugue, Depersonalization Disorder and the Dissociative Identity Disorder. These disturbances are characterized by profound alterations of consciousness and memory. A person's sense of identity and his/her perception of reality are impaired. I need help

Read the material in chapter eight on DID. Considering the controversies surrounding this disorder the text leaves with a focus on the unresolved issue of the reality of recovered memories in DID (p. 302-303). Then go to the website of the American Psychological Association and read the summary regarding this issue at: APA web

What are dissociative disorders and can they be treated effectively?

What is the role of trauma in creating dissociation disorders?

Highlights on Dissociative Disorders and Their Affects

Compare and contrast SOMATOFORM AND DISSOCIATIVE DISORDERS. Focus on: *how repression and anxiety (psychodynamic model) is possibly involved, *DSM-IV diagnosis criteria, *and the most effective treatments.