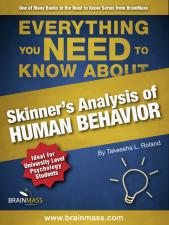 This book describes Burrhus Frederic Skinner's experimental analysis of human behavior as well as concepts he developed such as operant conditioning, reinforcement, punishment, superstitious behavior, and self-control. Skinner was especially interested in understanding biological and environmental factors that may influence human behavior. Prior to studying human behavior, Skinner conducted a series of behavioral experiments with animals and later generalized his findings to human behavior. When he began to conduct experiments with human participants, he chose to focus on individual participants as opposed to groups of individuals. He believed that behavioral responses to stimuli could be better observed through experiments involving individual subjects as opposed to groups.

To date, Skinner's work can be attributed to the establishment of numerous behavioral therapy techniques and he is considered to be one of the founding fathers of behavioral research (Task Force on Promotion and Dissemination of Psychological Procedures, 1995).

This book is ideal for first through fourth year college and university students, especially those studying psychology, as Skinner's work has made a significant contribution to this field.