HTML stands for 'HyperText Markup Language' and is the earliest and most fundamental language for creating and describing web page content for a web browser to interpret and display. In the beginning, it was the only way to design a web page, and though many more languages have joined the fold now to give web design great leaps in functional capabilities, HTML remains the backbone. Many of the new languages even require embedding into an HTML skeleton of a web page.

HTML has two main parts to it - the content itself that viewers will see, and the tags that contain the code to describe how the content will be shown. Now, CSS is used for most formatting in web design, keeping content and style separate, but some basic formatting, such as paragraph breaks, lists, font transformations, title/subtitle designation, etc. are still considered content markings. These are designated in tags which are bounded by the < and > symbols, and are placed at the beginning and end of the text to be altered. For example:

Here, the '<b>' is called the start/opening tag and the '</b>' is the end/closing tag, meanwhile the 'b' itself is the tag name for bolded text so the above would appear to a viewer as follows:

It is important to always be closing your tags in HTML, or else everything written after 'bolded text' would continue to be affected by the start tag, and therefore be bold no matter what else you write. This is a minor example, but failing to close tags can cause serious and difficult formatting issues in large documents. 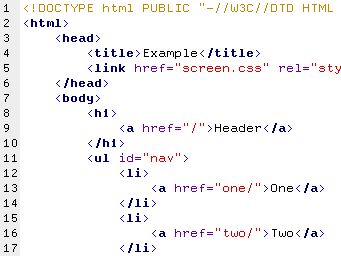 Example of working HTML for a webpage

All web page content is simply HTML elements, like the bolded example above, put together. There are many tags which do different things, from allowing image embedding to to creating interactive forms, in order to achieve a readable, useful website. While it is possible to insert more formatting, such as colours, into some tags using attributes, that practice is frowned upon by the modern paradigm separating content, style and behaviour, and so best left to CSS. Recent versions of HTML (such as HTML5) also include semantic tags such as the <body> and <section> tags that do not show up to the viewer, but make more specific CSS formatting possible.

Use HTML and JavaScript to display table from input

I did most of the homework part. I need someone to help me to fix it (see attachment for requirements) <!DOCTYPE html> <html> <head> <script type="text/javascript"> document.write("Please Enter items purchased with price of each<br/> Item: Price, Item: Price<br/><br/>"); document.write("Ex:Bre

Identify the errors in the HTML code

Identify the errors in the HTML code provided in work.html and work.css (download attached ZIP). Correct the code and create HTML comments explaining why the original code would not work properly, does not comply with the XHTML 1.0 strict standard, or is not an example of good coding practice. work.html <html xmlns="http:/

Investigate the reasons why the XHTML standard 2.0 failed to gain acceptance. Evaluate the way web standards are produced and suggest possible improvements.

The Key Aspects of Research

Discuss what are the three key aspects of research (originality, gain/contribution and knowledge and understanding)? Which one of them you consider the most important, or are they equally important? With academic references.

Compare and contrast the use of templates and style sheets to format a web page in Dreamweaver.

I need help with the following assignment: Big Data is a term used to describe the voluminous amount of structured and semi-structured data generated by companies. The term is used when referring to petabytes (PB), exabytes (EB), and zettabytes (ZB) of data. Companies face challenges when it comes to capturing, storing, searc

Which of Kurzweil's predictions do you agree with, and which do you doubt? Why? Please be specific. Are you thrilled or worried about the coming singularity and exponential technology advances? Make your case with specific supporting materials.

Write a Ruby program with the following specification.

Write a Ruby program with the following specification: Input: A list of numbers from the keyboard. Output: The second smallest number in the list, along with its position in the list, with 1 being the position of the first number.

Creating a Web Page including a Game

Create a Web page called "game.html" and add a layer to it, which will be treated as an object, with an image for its contents. Add another image which will start the game when clicked on. When the game starts, the layer, including the image, will move randomly in any direction but not more than 10 pixels. The layer will not lea

CSS to change the layout of an HTML page.

I need to learn how to use CSS to change the layout of an HTML page. CSS is a very powerful tool for changing the way a webpage is displayed. It is extremely flexible and allows the designer to deliver HTML code to many devices without changing the markup. First I want to learn the HTML tags to create sections in the code. Next,

Create a HTML website using the following guidance. 1. A minimum of 5 HTML webpages are used to create a website. 2. The website is used to present an educational topic, or deliver an educational lesson. 3. All webpages used are styled using 1 common external CSS file. 4. All webpages have a consistent look and feel. 5. T

Compare HTML and XML and provide advantages of XML over HTML.

Give one example in which we may damage the evidence during the analysis process. Will this damage be defensible in a court? If not, what should we do?

Recall extensive change you have witnessed recently inside your company or a company you are familiar with. Has it been successful? Characterize why it won or failed. Try to generalize your observations so they can serve as a guideline for similar cases.

Some argue that companies should put more effort into identifying managers with innate leadership abilities, and helping to develop these, rather than attempting to indiscriminatingly train technically proficient managers to become good leaders, irrespective of their current abilities. Their line of reasoning is that leadership

Workplace bullying can be a significant source of conflict, and stress, at work. Some of the generally recommended approaches to resolving conflicts of this nature typically entail mediation or other timely intervention by authoritative third parties (e.g. upper management). What other courses of action would you recommend if

Conflict-management techniques allow managers to control conflict levels (not only decrease but also increase them). Select a problem that disturbs you and is not solved. The problem can address any environment: your workplace, community, society, humankind. Describe a method of making it more widely perceived by other peopl

Briefly discuss XML and its standards, identifying the difference between XML and HTML. Provide three examples of how XML is used. Build some example code using XML and the corresponding DTL for the tags used in the XML.

What is a step-by-step checklist that outlines your process for publishing a brand new website?

Give examples of four different programming paradigms and describe it.

1) How can CSS be used for developing a unique website style? 2) Distinguish absolute and relative hyperlinks, and explain why this distinction is important.

O Describe the three main types of firewalls. o Explain how each type protects a network. o Determine which firewall is the most efficient and why.

Describe how css can be leveraged in website programming.

I need to distinguish absolute and relative hyperlinks, and explain why this distinction is important.

1. There are three main frames - top, middle, and bottom as indicated above with the three rows. The top frame has a table with three columns. The middle frame is divided into two frames. The bottom frame is the hot links frame. You may replace the frames with tables i.e. instead of frames, use tables throughout. ** You may u

Research and describe web page development application software from various software companies. How are they similar? How are they different? What are some of the important features of these programs that assist a person like me learn how to create web pages?