Flash is a for making graphics move. It also has capabilities for creating still images, vector graphics, drawings and text, but the main draw of this software platform is for animations, be they on websites, games or even TV. Popular children's cartoons like My Little Pony, Clone High and Pound Puppies were all animated in Flash, for example, as well as countless addictive web games. 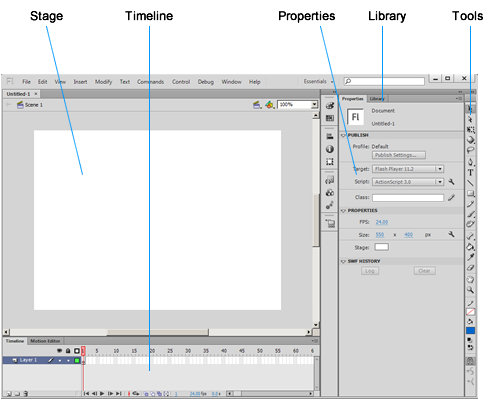 Flash looks a bit like any other graphics program, such as Photoshop, but it also has its own language, ActionScript, which allows a programmable aspect so graphics can move according to a pre-determined schedule. It has capabilities for bidirectional streaming in video and audio, and can also register and act upon mouse, keyboard, microphone and camera input, making it a very powerful tool. Flash used to be heavily used in web design for this reason, and shifting, responsive menus and sliders with transition effects were very common. However, its real staying power on the internet is in video/audio players, advertisements and games.

In order to play flash in their browser, a user must have Adobe Flash Player installed, but this comes free with many common browsers and OSs for many systems and devices, though with some notable exceptions for iPads in the past. Flash files are saved in a .swf format which is pronounced 'ShockWave Flash'. They are also often traditionally called 'movies'. These are used as plug-ins for web pages, and the mix of vector graphics and efficient program code means that these files can be smaller than equivalent bitmaps or video clips. That means less bandwidth and CPU power is used, and therefore a faster browsing experience is possible. However, due to incoming advancements with HTML5, etc., as well as web design trends turning away from Flash, it is not as common to find outside video/audio players and games as it once was.

Accessibility Legislation in Europe and the U.S.

Compare and contrast the legislation governing Web accessibility in Europe with that in the US. (Provide references to the work and add a personal conclusion. References do not count to the total wording count).

This question examines the set of criteria for assessment of video clips to explore their suitability for inclusion in multimedia presentations over the Web.

Develop a set of criteria for assessment of video clips suitable for inclusion in Multimedia presentations over the Web. Discuss your choices and where they differ from choices you would make for a CD-based video presentation.

Which formats are best for Web-based video?

Educational technology helps to make employee's training cheaper, more individual and more effective. Based on your experience, describe a method that exploits (any form of) educational technology and specify its contribution. If possible, present non-traditional examples that might give us a new view to education.

Would you help me with the following discussion questions? What do you think is the worst type of unwanted electronic communication? Give your reasons. For example: * Are junk faxes worse than cold calling? * Are junk SMS/MMS worse than e-mail spam? * Are Web page pop-ups, pop-unders, and Flash ads encroaching on the m

How do I get the output results to stay on the screen?

Attached is a code file that works accept when a correct dollar amount an location number is entered, the result flashes on the screen and disappears. How do I get the output results to stay on the screen? #include <stdio.h> /*Using define macros for assigning tax to different stores */ #define DelMar 7.25 #define Encin

The History and Future of HTML

What is the history of HTML? Can you explain why early versions of HTML were so flexible? What is the future of HTML? What is the value of standardization and the move to XHTML?

Discuss the Different Types of Storage Devices and Compare

Discuss the different types of storage devices - which ones you like, and why.

The use of sound and action in Web pages can produce mixed results, positive and negative.

The use of sound and action in Web pages can produce mixed results, positive and negative. Provide a URL for a site you feel uses sound and/or action effectively and positively. State your viewpoint and describe why the function added to the appeal of the site.

Write a short description of a potential multimedia presentation that could be implemented across the WWW for a particular subject of interest to you. The choice is yours and it can be from anywhere in the world. Later, you will be expected to demonstrate your skills through a series of simple exercises, (please note we do not e

Compare the access speeds of RAM and hard drive.

How much faster it is to access a piece of information out of RAM than it is from hard drive?

Think about the most difficult troubleshooting problem you've encountered in your recent experience- one where the solutions was not straightforward and where the problem was into a simple request for information. The problem you pick might be one your experienced personally, one your encountered at work or while serving as a la

GNE409 Internet Technology Assignment Semester 2 You are to create an Internet site to market a Hot Air ballooning business called "Hot Air - We're Full of It!" that operates in the Melbourne market, but books exclusively on the Internet. This website will include pull-down menus, buttons and flash animations. The Web