CPUs are made of several highly important parts, and the ALU (arithmetic and logic unit) is definitely one of them. All the integer arithmetic and logical operations a computer does is done by two register values being passed to the ALU for computation. Everything from high-tech lab computers to simple microprocessors have an ALU somewhere inside or else they wouldn't even be able to maintain a timer. Of course, the former have much more powerful and complex ALUs. 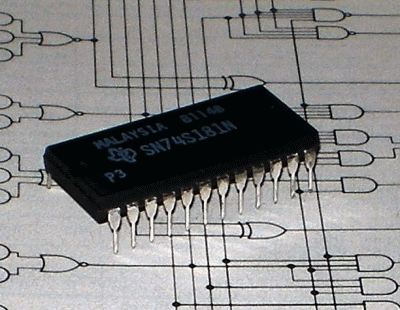 An ALU bitsclice lying on a page of logic gate diagrams

Modern processors perform these logical and arithmetic operations using two's- complement binary number representation that the ALU reads and computer before spitting out the result for other CPU components to deal with. However, two's-complement is not the only method of representation possible for ALUs to process - some can run one's-complement, sign magnitude format and true decimal systems, though those were more common historically than in today's world.

Most processor operations in computers with any sort of complexity are performed by multiple ALUs loading register data input and returning results into an output register. The orders for what operation to perform is relayed from translated code, either automated or programmed in by a human, by an external control unit. This control unit also 'feeds' and tidies up after the ALU by moving processed data from memory to it, and back.

FOR and WHILE Loops

Problem 1 Compare and contrast the WHILE loop and the FOR loop. Your discussion should identify the similarities, differences, advantages, and disadvantages of each structure. Which data structure do you consider to be more robust? Why? Problem 2 Design a calculator program that will add, subtract, multiply, or

What are some examples of techniques used to examine the brain's behavior link? Which one of these techniques do you feel has yielded the most results? Why?

Activation of the brain is measured by electrophysiological techniques using an electrical or magnetic field that the nervous system produces. These types of measures include may include magneto-encephalography (MEG) or electroencephalography (EEG). Brain scans, such as MRI (magnetic resonance imaging), fMRI (functional magnetic

Quality factors in a software product to measure quality

Over the years, we have developed quality factors that we look for in a software product to measure quality. These are usually done at the macroscopic level, but how would you assess quality of a computer program if you received an e-mail with a source listing of a program? Discuss both the qualitative and the quantitative aspec

Given Kudler's new strategy, your team needs to create a compensation structure for the following six positions. Store Manager, Cashier, Stock Person, Speciality Department Worker, Department Manager and Bagger. Each member of the team should pick one to two positions to analyze. Each team member must analyze all six positions

Answer four of the following questions. In responding to these questions, take the time and spend the energy to formulate a CLEAR and CONCISE message FOCUSED on the point of the question. Although verbosity seldom, if ever, demonstrates knowledge, be certain that your responses are complete and represent CRITICAL THINKING. Al

(a) Describe and illustrate how elements are normally added and removed from an efficient implementation of the stack ADT, as defined in class, which is implemented using linked lists. (b) A stack is used to evaluate the following postfix expression. Show the state of the stack