Immanuel Kant was a German philosopher who is widely considered to be a central figure of modern philosophy. He argued that human concepts and categories structure our view of the world and its laws, and that reason is the source of morality (Rohlf 2010). Kant continues to hold a powerful position in regards to modern metaphysics, epistemology, ethics, political philosophy, and aesthetics (Rohlf 2010).

Kant’s major work, the Critique of Pure Reason aimed to unite reason and experience. He was attempting to move philosophy away from the failures of traditional philosophy and metaphysics (Rohlf 2010). Kant hoped to end an age of speculation and resist the skepticism of thinkers such as David Hume. 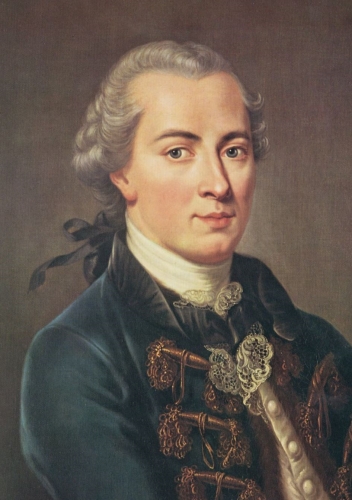 Kant published many other important works on ethics, religion, law, aesthetics, astronomy, and history. These included the Critique of Practical Reason, the Metaphysics of Morals, and the Critique of Judgment.

Immanuel Kant’s ideas influenced many thinkers in Germany during his lifetime. He moved philosophy beyond the debate between the rationalists and the empiricists. German and European thinking progressed after Kant’s lifetime.

In Kant’s entire life he never traveled more than ten miles from his hometown in Prussia (Rohlf 2010). He grew up in a priest household that stressed intense religious devotion, personal humility, and a literal interpretation of the Bible. Despite being raised in a religious household, he became skeptical of religion and was agnostic (Rohlf 2010).

Kant showed the ability to study well at an early age. He began university at the age of sixteen studying philosophy (Rohlf 2010). Kant became a private tutor in the smaller towns surrounding his hometown while he continued his scholarly research (Rohlf 2010).

According to Kant what is the only good thing?

For Kant, the will is the only thing that can be called "good" without qualification. What is it about the will that makes it good?

Discuss each subject with at least 150 words: Kants Phenomena and Noumena Kants Moral Law, Good Will and Categorical Imperative Kantian Theory of Justice

Kant would say that we have a duty to never lie. Why does Kant think this? Is he right? Why? Be sure to discuss Kant's first categorical imperative and concept of absolute rules.