The word Renaissance translates literally to ‘rebirth’ in French. This is the period from the 14th to the 17th centuries where Europe experienced a rediscovery of ancient Greek and Roman study and a recovery of the ancient Greek spirit of scientific inquiry. 1 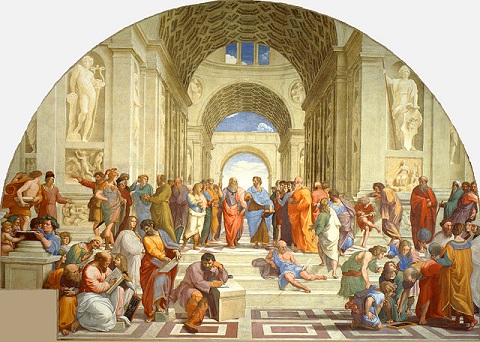 A popular misconception about the Renaissance was that everyone in Europe was equally affected. Art and science did not necessarily filter down to the average citizen like technology does today. Those who both contributed to and experienced the fruits from the Renaissance were typically wealthy artists, philosophers and the rest of the rich.

In reality, many who lived through the Renaissance did not even recognize the importance of the time period. The Renaissance was not so much central to the 15th century as it is important to us now because it influenced the way we live and learn today.

Humanism flourished during the Renaissance. It is an outlook that emphasizes human agency and has two key assertions: that individuals should exercise thought and that secular matters are important.²

Many historians believe the Renaissance was born in Italy, one of the wealthiest countries at the time. An abundance of wealth was necessary to afford and sustain the production of art and study of philosophy and science.

Venice, the richest region of Italy during the Renaissance, was trading with Ottoman Empire. This was the source of much of the city’s income. If they had not been engaging in the trade of textiles and pepper with the Islamic world, they would not have been able to afford the production of much of what we recognize today from the period.³

1. As Islam spread across large regions, Muslim scholars began to adopt ideas from Ancient philosophers. In the following passages, we read some thoughts about the role of Aristotle in Muslim and Renaissance Italian political thought. The first passage was written by Muslim scholar Mohammed Al-Farabi. When one receives instru

Motives Driving The Age of Discovery

In the fifteenth century, commercial supremacy was transferred from the Mediterranean and the Baltic to the Atlantic seaboard. Portuguese and Spanish explorers opened up great opportunities for trade in gold and spices. The exploration era had a significant impact on Europeans and Native Americans. Europeans introduced new crops

How did the thinking of the Scientific Method differ from the thinking that preceded it? Why did it begin in Europe when it did?

Social conditions leading to the Renaissance

What were the social conditions that led to the Renaissance and what were some characteristics of Renaissance art?

Core Intellectual, Political and Artistic Characteristics of the Renaissance

What were the core intellectual, political, and artistic characteristics of the Italian Renaissance (c. 1350-1550 CE)? Describe two figures that seem to represent especially important Renaissance characteristics. Explain your reasoning.

Religious Influence in the Renaissance and Baroque Periods.

Even though the art in the Renaissance and Baroque periods were not totally religiously oriented as had been the case before 1400, there was still much artistic effort put forth toward the creation of beautiful religious pieces. Explain why this influence continued through these periods and discuss at least three specific repres

Machiavelli's The Prince and Ideals of the Renaissance

How does Machiavelli's The Prince reflect the general ideals of the Renaissance or humanism?

I. 150 words Northern Europe: From Paganism to Righteousness The Celtic culture is greatly underestimated for its influence on Europe as a whole. This is because not much is known about the people or tribal communities we associate as being Celtic. Another group of influential people were those of the Carolingian culture,

To what extent were climate and disease key factors in producing economic and social changes? Answer

To what extent were climate and disease key factors in producing economic and social changes? (The Medieval West and The Italian Renaissance period)

The fall of Italy

The fall of Italy acted as a catalyst, causing historians and political theorists to approach these disciplines in new ways. Discuss the two main individuals in the text who are representative of the new Renaissance thinking.

What are the impacts of the word renaissance on the continent of Europe? A brief historical review of the term will be appreciated.

Most students know that the word "Renaissance" comes from the Latin/Italian literally translated as "again birth" or "rebirth". This term will generally lead one to ask, "why was a rebirth necessary" and "if society was to be reborn, what would it base its new life on?" Another question is "did society need to be reborn becaus

Venice during the Renaissance

Briefly outline the artistic, architectural, and political cultural attributes of Venice during the Renaissance period.

Characteristics of Work Produced in the Renaissance Style

What are some characteristics of the literature, art, and music of the "Renaissance" style?

view images available from your background readings and pick a work of art from the Renaissance era that catches your eye. It can be one that reminds you of an event from your own life or otherwise gets some kind of emotional reaction from you. Introduce your report with some information about the artist, how the work you chos

Take a position and discuss the following proposition: From ancient Mesopotamia through the Renaissance, individualism was the primary value driving the historical development of Western Civilization.

Mental illness prior to the Renaissance period

What are some methods that were used to treat individuals who were presumably suffering from some form of mental illness prior to the Renaissance period? What was the rationale behind these methods?

Renaissance & the Humanities in the Cinema

Hello Brainmass OTAs, I need to do the paper below. I would really appreciate it if you can help me. I write the full assignment below - ---------------------------------------- INTERNET ACTIVITY Each theme of the unit features several Internet sites, selected for their completeness and relevance. For this theme we have se

Discuss renaissance humanism, its major influences (such people, social and/or political influences) and analyze the last supper to reveal how it adheres to the aesthetic values of renaissance humanism. The essay should use the work of art as an example of the influence of philosophy in the humanities.

New monarchies were the rulers of European nations during the 15th century who created a strong central government. The centralized governments enabled the New Monarchs in the 15th century for an era of colonization and conquest in the 16th century, and paved the way for rapid economic growth in Europe.

What qualities characterized the "New Monarchies" and what are some of the best examples of such princely states? The Renaissance in 15th century resulted in the rise of new monarchies in Europe. Their rule was hereditary in nature, but they cared for the aspirations of the people. The new monarchs created a strong central

Charlemagne, the king of the Franks and Lombards came to the throne after the death of his brother Carolman. His father Pepin III divided the kingdom between his two sons. Unlike his brother, Charlemagne proved to be an efficient administrator and conqueror. Charlemagne extended his empire through military exploits. At a time, when Europe was in a state of disarray, he unified it by the power of the sword and cross. He conquered the Lombards in Northern Italy, acquired Bavaria and campaigned in Spain and Hungary. He did not call himself emperor but king of Franks and Lombards. Charlemagne was also an able administrator. He delegated the authority to the local rulers; the Frankish nobles. He allowed the different ethnic groups to keep their distinctive. He secretly viewed the events of his empire through his representatives known as missi dominici Charlemagne was a great patron of learning. He gathered in his court the finest men of letters. He reformed the palace school and set up monastic schools throughout the empire. The flowering of learning under Charlemagne's patronage has come to be known as the "Carolingian Renaissance." The empire he established was not known as the Holy Roman Empire but as Carolingian Empire. By establishing a strong government in Western Europe, he paved the way for the development of modern Europe. Crusades: Crusades were a military conflict between Christians and Muslims during the middle ages. When Muslims captured Jerusalem, the most sacred place for the Christians, in 1076, there started a military conflict between both. The first crusade was only successful from the military point of view, but other seven major crusades did not get the desired results. The military confrontations continued upto 200 years (1095-1291). The Crusades had far-reaching political, economic, and social impacts

1.) Discuss the Charlemagne. Why is this period referred to as the Carolingian Renaissance("renaissance" meaning "re-birth"? Charlemagne was a great emperor in the history of Europe. At a time, when Europe was in a state of disarray, he unified it by the power of sword and cross. Charlemagne, otherwise, known as Charles,

another "renaissance" in art and culture

Part A. How are we, near the beginning of a new millennium, going through another "renaissance" in art and culture? What factor(s) does our culture have in common with the culture of Renaissance Italy? What factor(s) differs? Part B. Could our time produce another Michelangelo or Leonardo (not the Ninja Turtles!)? How would

Please help me with these 2 questions: Course is Humanities 1. How are art and culture a reflection of our changing views of nature, society and the individual? Provide TWO examples. 2.There is a saying: 'Man is the measure of all things.' Think about this and how it's prevalent in ideas and thoughts of the Rena

Renaissance dance and movement facts are featured in terms of these areas: defining characteristics artists of the time period relevant time frame where movement orginated impact on society