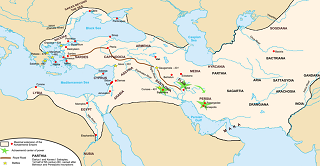 The ancient Roman and Greek civilizations are seen as the most influential to modern day Western civilization. Because of this, it is easy to forget about other empires that existed during ancient history. Civilizations such as the Achaemenid Empire, Macedonian Empire and the Maurya Empire were all crucial during their times of existence.

The Achaemenid Empire existed from 550 - 330 BCE and was the largest empire the ancient world had ever seen. It extended from Anatolia and Egypt across western Asia to northern India

and Central Asia¹. This was a Persian empire that is not widely known because most Western history textbooks simply remember the Persians as the civilization that went to war with Greece.

The Macedonian Empire was an ancient civilization in the northeast Greek peninsula. Macedonia began as a small kingdom, seemingly irrelevant to Classical Greek affairs to briefly acting as the most powerful

state in the world.

The Maurya Empire was an Iron Age power in ancient India, ruled by the Mauryan dynasty from 332 - 185 BCE. It consisted of much of modern day India and Pakistan. This was a brief empire but had a remarkable and famous emperor named Ashoka. After the Kalinga War of 260 BCE and the preceding years of bloodshed, Ashoka adopted Buddhism and the concept of dharma in his practices.

These are not the only lesser known ancient civilizations to have existed. Explore this section of BrainMass to discover others and broaden your knowledge of ancient history.

1.The Achaemenid Persian Empire (550–330 B.C.). The Metropolitan Museum of Art. Retrieved from http://www.metmuseum.org/toah/hd/acha/hd_acha.htm

How does this temple reflect the influence of Buddhism over a large geographical area?

Which cultures developed during the Bronze Age period in the Aegean? How were these cultures similar to and different from one another? How does the art they produced reflect their cultures?

Trans-Saharan Trade and Expansion of Ghana

1. Increased trade in trans-saharan Africa after 18th century 2. Influence of Muslim Arabs and Berbers in the trade 3. West Africa became the chief supplier of gold to international community 4. Ghana had monopolized the trade in West Africa 5. Expansion of Islam in West Africa and Ghana's excessive dependence on Mus

Debrief of Police and Race Relations

Please help provide a couple paragraphs of discussion comparing the following historical empires: What can be compared of the Arab Umayyad and Abbasid empires as compared to the Ottoman Turk empire. What happened to the Ottoman Empire?

Religion is the Opiate of the Masses

Karl Marx famously stated, "Religion is the Opiate of the Masses." Access the accuracy or inaccuracy of this statement from a historical point of view.

2-3 pages long. What evaluation can be made about the leadership styles and personal examples of Ho Chi Minh and Ngo Dinh Diem that would enable both of them to tap into the hearts and minds of the Vietnamese people and mobilize support for their initiatives? Why, in Vietnam, was personal leadership so very important? Refer to s

Summarize the major factors that allowed the Incas to conquer and rule their large empire. Some suggest that, in many ways, the Incas were like the Romans or other Pre-Columbian American Civilizations. Evaluate whether they were more similar or different, and why. Make sure to identify which civilization you are comparing the In

Anciant Arabic and Hindu contributions in the History of Math.

The saying goes that the West owes a great debt to the ancient Arabic and Hindu cultures. A) What was the nature and significance of this debt B) What were some of the conditions that made it possible

Which civilization of the Fertile Crescent do you consider to be the most important?

Which civilization of the Fertile Crescent do you consider to be the most important?

Asian Civilizations Prior to European Colonialization

For mainland Asian countries, plus Japan, what kind of societies and cultures developed before European colonization? Describe their social and cultural attributes.

The role of kingship in ancient Sumerian society