Mesopotamia is one of the most historically influential civilizations in ancient history. At its time of existence, Mesopotamia held several of the most developed and complex regions. Examples of its influence today are writing, taxes and the presumption of innocence.

Mesopotamia was one of the four riverine civilizations where the Cuneiform script was invented1. This was one of the earliest forms of writing, marking the transition from prehistoric times to ancient history. This introduction created a class structure that was new to the Mesopotamians. If someone was able to read and write, they were considered an elite. The Summer, Akkadian, Babylonian and Assyrian empires all occurred during the Bronze Age in Mesopotamia. They are native to modern-day Iraq. 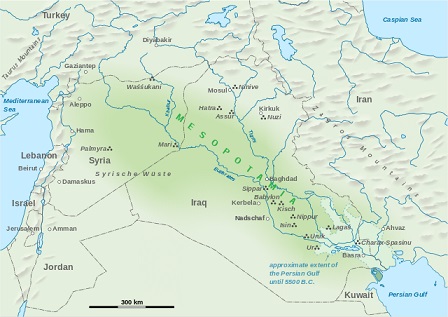 One of the most famous figures in Mesopotamian history today is Hammurabi, the leader responsible for establishing the Babylonian empire. He introduced Hammurabi’s Law Code which is infamous for its severity and the introduction of presumption of innocence.1

The Neo-Assyrian empire took place during the Iron Age in Mesopotamia. This empire grew to include all of Mesopotamia and was undoubtedly the most brutal army the world had ever seen until that point.

Mesopotamia had a form of proto-socialism for many years until it was replaced by something very similar to private enterprise with the new city state period. A Mesopotamian could produce as much as they liked as long as they gave a percentage to the government.1This was one of the first examples of something equivalent to the modern-day tax system.

Part One: Written Records and Early Evidence Now that we have read about the kinds of archeological and historical records that tell us about past societies, let's engage with messages from the past that are thousands of years old. In this document there are three passages from found documents. They have been translated into

Prehistory and the Ancient Civilizations

Can anyone educate me regarding one distinct Mesopatamian and one Egyptian female and their accomplishments? Preferably Hatshepsut (ruled ten yrs) and perhaps Sargon's daughter? Thank you, LP

Discussing the Vulnerability of Mesopotamia

1. Determine why Mesopotamia was so vulnerable. 2. How did Mesopotamia shape the forms the craftsmen were compelled to create? 3. Choose at least two images of Mesopotamia and discuss them. Note details like subject matter, who is represented, clothing, weapons, etc. and what they are meant to convey to their viewers. Inc

Some have said that the strength and endurance of the Empire and the regular, dependable recurrence of the Nile flood gave the artists-craftsmen a sense of consistency that profoundly influenced the nature of their artistic creations. Look at geography again. How is Egypt different from Mesopotamia? We often have people with

I need information and a discussion on the following: * Cultures of Mesopotamia, especially Summer, and Egypt * How cultures change over time * What factors lead to growth and change in a society or cultures. Please provide references if you use an article(s). Thank you.