Jainism is an ancient religion from India that teaches that the way to bliss and liberation of the soul is to live a life of non-violence and self-control. It emphasizes spiritual independence and equality between all forms of life from human beings, to animals, to plants 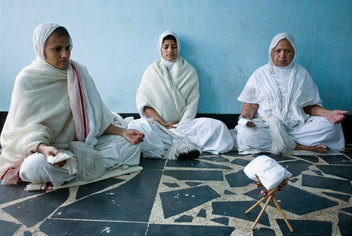 – which Jains believe all have a living soul. With the belief in this equality, Jains are strict vegetarians and live in ways that minimize their use of the world’s resources.1

Jainism, like many Eastern religions, believes in reincarnation and seeks to liberate their souls from continual rebirth. The means for doing so is to eliminate all karma from the soul. However, the Jains idea of karma is more elaborate than other religions.2

They believe karma is a physical substance, a type of particle that sticks to the soul through violent actions, wrong deeds, or bad thoughts. The way to liberate one’s soul from karma is to avoid it by behaving well or by having the right mental state so that karma will not stick to the soul.2

Currently, there are two major sects of Jainism; Digambara and Śvētāmbara. According to a 2001 Census of India, where the census figures were considered to be lower than true figures, there are over 4.2 million Jains living in India. 1

Comparing Jain Nun and Monk Lifestyles with your own

Make a detailed list of your activities from the time you rise in the morning through lunch. What activities would have to be altered or abandoned during this time period from the perspective of a devout Jain nun or monk and why? My Alarm goes off I am so tired as I went to bed really late. Stayed up watching TV. I st

Comparing Present Life Activities with a Jain Nun or Monk

Life as a Jain Nun or Monk

Write an essay based on the following: Make a rather detailed list of your activities from the time you rise in the morning through lunch. Once the list is finished, review it from the perspective of a devout Jain nun or monk. What activities would have to be altered or abandoned during this time period?