The interpersonal theory of abnormality, stemming from Harry Sullivan's work, focuses primarily on how negative relationships that are long-term can greatly impact an individual and cause abnormal behaviour and mental disorders. Some of the concepts within interpersonal theory include stages of psychosocial development, theories of self-concept, and attachment theory.

Erik Erikson's famous theory of psychosocial development describes various stages children go through as they grow, each involving a crisis that needs to be solved. Some of the stages include trust vs. mistrust and intimacy vs. isolation. In the trust stage, if the child is abused or mistreated, they are likely to grow up as distrustful. In this way, negative relationships and events within each stage can lead to abnormal behaviour and mental illness. 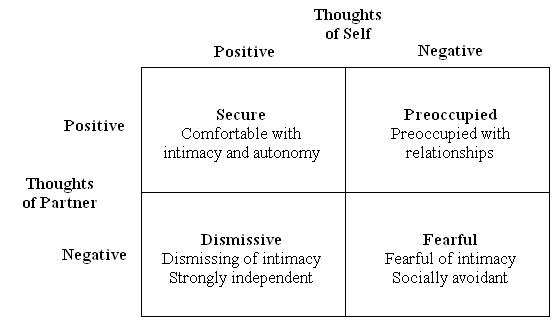 Attachment theory by John Bowlby explains how early childhood experiences with the caregiver can influence relationships in later life. Quite simply, a child-caregiver relationship that is loving and secure will promote a confident individual who seeks relationships that are also loving and secure, while those raised in an inconsistent or avoidant method may be filled with anxiety and be insecure, jealous, and needy in future relationships.

Interpersonal theories of abnormality also discuss how the self-concept of the child is influenced by criticism and feedback they get as they grow up. If a child grows up and is constantly criticized about an aspect of themselves, they may repress that part (the 'not me') and hold in anger or anxiety in relation to it. Scripts and prototypes are also created involving how the child sees the self and their expectations in relationships. Conflict and negative relationships can again lead to anxiety and abnormal behaviour.

Need help with how journal writing can help with the development of a qualitative researcher, or a researcher in general?

Traditional family therapy requires all members of the family to participate in treatment sessions, and holds that most problems are maintained through "circular causality." What are some of the advantages and disadvantages of this circular causality framework, particularly as applied to various presenting problems (e.g., alcoho

Compare and contrast social learning theory with interpersonal theory to discover which theory and form of therapy would be beneficial for an 18 year old girl who has been molested by an uncle at age 15, raped by a stranger at age 18, and who has gained 80 pounds so that she would be unattractive and safe from rape.

Examine Sullivan's Interpersonal Theory. Pick either "Tensions" (Energy System) or "Dynamisms" (Behavior Patterns). Compare and/or contrast the classes listed (Needs and Anxiety or Malevolence, Intimacy, Lust and Self-System) with the wisdom given in the Book of Proverbs. Use Scripture from the Book of Proverbs in your thread

Personnel Psychology - interpersonal and deviant behaviors in the workplace

I was reading the article above (Personnel Psychology) and some questions which I hope you can offer or point me to the right direction. 1) What interpersonal and deviant behaviors in the workplace as indicated in this article? 2) What factors a manager (knowledge of personality disorders) in a leadership position must c