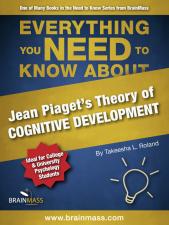 This book describes Piaget's theory of cognitive development, which comprises four stages of intellectual maturity that occur throughout an individual?s lifespan. More specifically, this theory explains the nature of how humans acquire knowledge, comprehend it, and apply it. The following four stages, which were developed by Piaget, will be described in detail: the sensorimotor stage, the preoperational stage, the concrete operational stage, and the formal operational stage. According to Piaget, humans experience several transformations in intellectual ability until reaching maturity. The process of cognitive development, which involves the progression of mental functions such as information processing, memory, conception, reasoning, perception, and language, will also be described.

This book is ideal for 1-4 year college students, especially those studying psychology as Jean Piaget's theory made a significant contribution to this field.

Cognitive development can be described as the gradual improvement of skills such as information processing, memory, conception, reasoning, perception, and language (Sun, 2008). According to Jean Piaget s theory of cognitive development, there are four stages of intellectual maturity that occur during infancy, childhood, adolescence, and adulthood. Piaget gained an impression of the early stages of development while observing and interviewing young children. Based on his observations, he realized that infants initially obtain knowledge visually and sensually. More specifically, he noticed that infants and toddlers learn primarily through exploration, play, and daily social exchanges (Berk, 2007).
Interviewing young children, on the other hand, revealed to him that toddlers begin to mature intellectually by consistently rearranging their thoughts and learning more challenging concepts. During the interviews, he noticed that children s answers to his questions started off as instinctive and then gradually shifted towards more logical and socially acceptable answers. He attributed this pattern of answering questions to the children s daily experiences and social interactions with family members and friends (Berk, 2008). One characteristic that Piaget also noticed during the interviews is that a child s ability to obtain new knowledge and skills is limited by cognitive and biological maturity.
In regards to school age children, Piaget explained that this age group begins making decisions based on logic and that as they get older, their level of thinking expands beyond logic to more abstract ideas. Furthermore, he explained that when school age children transition into adolescence, that they begin to learn how to acquire and retain important concepts about relationships and life as well as how to adapt to new situations or life-changing events. Adolescents also begin to solve problems and complete assignments such as homework or class projects through organized planning (Piaget, 1962). As adolescents transition into adulthood intelligence and memory generally increase until senility begins. This overview provides a brief description of the four stages of cognitive development that were proposed by Piaget.
Overall, Piaget s theory is meant to demonstrate that intellectual maturity and physical development occur simultaneously. Each of the four stages he described, as well as learning processes that are specific for each developmental age, will be described in this book so that one can see how each stage transitions into the other. This book should also help you understand that each stage is not independent of the other, but instead builds upon one another throughout an individual s lifespan.