Intelligence: A very general mental capability that, among other things, involves the ability to reason, plan, solve problems, think abstractly, comprehend complex ideas, learn quickly and learn from experience. It is not merely book learning, a narrow academic skill, or test-taking smarts. Rather, it reflects a broader and deeper capability for comprehending our surroundings—"catching on," "making sense" of things, or "figuring out" what to do. 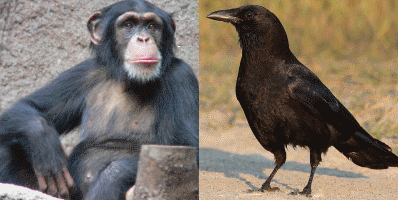 Apes and crows are thought to be the smartest creatures on Earth after humans thanks to innovation abilities with tools2.

In philosophy, as opposed to computer science, the discussion revolves much around the relationship between artificial intelligence, and the mind, consciousness and human intelligence. On one hand philosophers seek to answer questions such as “In what ways can a machine have a mind similar to the human mind? Can it have consciousness?”; “What is the difference between a human brain and a computer?”; “Are there problems that machines will never be able to solve that only humans can solve?”; etc. On the other hand, some philosophers will work to establish concepts surrounding the very idea of artificial intelligence itself such as “AI is not possible.”; “AI is not moral.”; etc.

Furthermore, this topic can be expanded to consider topics such as a machine's ability to have emotions, a soul, self-awareness, and morality. Searle, Hubert Dreyfus, and Alan Turing are prominent philosophers on this topic.

Part 1 1. Present three specific questions that you would ask in the Turing Test to determine if something is real or artificial intelligence. 2. Explain why you think these questions would be the type to reveal the computer to be a computer? Why would these responses have to be given by a human being? 3. (If you don't

Can computers think? In the latter part of the 20th century, the philosophy of mind has taken an interesting new turn with the attempt to create artificial intelligence (hereafter referred to as AI). Today's computers are able to perform many of the activities that we formerly thought only human minds could perform. These a

Psychologist Stevan Harnad has proposed the Total Turing Test for artificial intelligence. To pass this test, the computer being tested would have to be able to do everything that a normal human being does, including walking, riding a bicycle, swimming, dancing, playing a musical instrument, and so on. Only a computer with a rob

1)What role do metaphors play in helping people grasp the concept of Artificial Intelligence? Do you agree with the statement that the brain is a "meat machine"? What other metaphors might be applicable to the function of the human brain? 2)In the article "First tentative steps," Rodney Brooks is quoted as saying, "My belief