The Great Depression refers to a severe worldwide economic depression that occurred in the years before World War II. The specific timing varies depending on what part of the world is in question. In most countries it began in 1930 and was the longest and deepest depression of the 20th century. 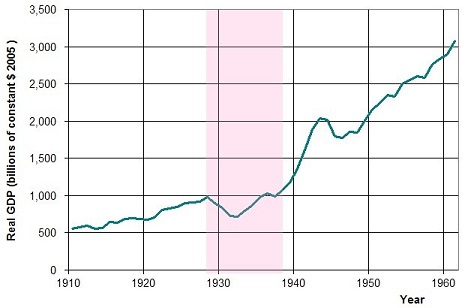 The depression has its roots in the United States when the stock prices began to fall around September 4th, 1929. This led to the the stock market crash of October 29, 1929, known as Black Tuesday.

The Great Depression was socially, politically and economically devastating to every country it touched, regardless of how rich or poor they were. Everyone in these countries felt the depression on every level. Personal incomes decreased and international trade plunged by more than 50% while unemployment rose to 25%.¹The cities hit hardest were those who depend on heavy industries.

Most economists and historians believe that the Great Depression was caused by the 1929 crash of the stock market. Historians do not necessarily agree though on the causal relationship between various events and the government policy in causing or helping the Depression.

There are two main points of view on what caused the Great Depression¹:

Demand-driven theorists believe that there was initially a recession caused by underconsumption and over-investment, causing an economic bubble. A loss of confidence then led to a very sudden and drastic reduction in consumption and investment. Once the panic and deflation set in, many believed the smartest thing to do was keep clear of the markets.

Monetarists believed that the Great Depression started as an ordinary recession, but that important policy mistakes by monetary institutions such as the Federal Reserve caused a shrinking of the money supply. This greatly exacerbated the economic situation, causing the descent This graph illustrates the USA unemployment rate from 1910 - 1960.         into Great Depression.

Please help me to describe a weakness in the Bank loan sector of the economy that would later contribute to the Great Depression.

1) What are the problems of marshalling the economic energies of a nation at war? Are these problems eased or aggravated if the nation is a democracy? Why? Why is there a need for rationing and price regulation? 2) In the context of Babbitt and Major Barbara, consider the plight of Undershaft, the industrial magnate and that

What are some of the causes of the stagflations of 1973 and 1979? In what way were these episodes of stagflation different from the Great Depression of the 1930s?

The Influence of Franklin D. Roosevelt

This job examines how did over-consumption and debt help to trigger the Great Depression. What are the threats of such an economic collapses today? I also discuss the influence of Franklin D. Roosevelt on not only the presidents that have followed him but on the institution of the presidency itself.

"To what extent was the Fed responsible for the great depression?"

1. List the (minimum) 20 scholarly resources (refereed journals and research monographs) that you plan to consult (or already have consulted). 2. Outline the essay as a "research proposal" as if you were applying for funds to undertake the project (ie explain why the topic is important, and how your results might cast light

Political Implications of the Great Depression

What are the political implications of the Great Depression on United States, as well as on world trade?