Egypt gave birth to what later would become known as 'Western Civilization,' long before the greatness of Greece and Rome. 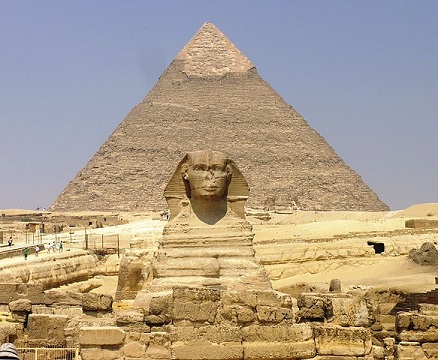 through the lens of resource distribution and geography. The Nile River shaped the worldview and eventual influence of Egypt. The river flooded consistently once a year, depositing mineral-rich silt over the crops, creating an extremely fertile environment. The river was also easily tamed and crops easily irrigated. The convenience of the Nile meant that ancient Egypt was able to create large food surpluses with relatively small amounts of work¹.

Most historians divide ancient Egypt’s history into three kingdoms. These are aptly named the Old Kingdom (2649 - 2152 BC), the Middle Kingdom (2040 - 1640 BC) and the New Kingdom (1550 - 1070 BC)². The Old Kingdom is the period during which the practices most people associate with ancient Egypt occurred. The pyramids that acted as a symbol of the societal control, the first Egyptian pantheon of Gods, remarkable literacy, divine Kingship and wealthiness are all characteristics of the Old Kingdom. The Middle Kingdom restored Pharaonic rule after its collapse through outsiders. A new interest in conquering emerged due to their superior military manpower. Because of this, the Egyptians escaped their geographically imposed isolationism and evolved into the New Kingdom¹, of which expansion through trade and military was a key component.

Ancient Egypt was finally conquered by Alexander the Great in 332 BC. To put ancient Egypt’s lifespan into perspective, ancient Egypt lasted 1000 years longer than Christianity has been around. There was an entire culture and civilization that lasted longer than Western civilization has existed and it had run its course before the West even emerged.

Assignment 1: Essay - Exploring Ancient Mysteries Due Week 4 and worth 100 points Choose one (1) of the topics below and develop a three to four (3-4) paragraph essay (of at least 250-500 words) which adequately address the topic you have chosen. Topic Choices There have been many theories regarding how the pyramids

Environmental/Geographic Factors for US Expansion and Egypt's Development

What was the function of the Karnak temple, Pyramid of Giza and the spinx in their culture (Ancient Egyptians).

What advantages did the early Egyptian and Near Eastern people gain from civilization and what did they lose?

What events and changes prompted the Egyptian and Near Eastern people to initiate the first civilizations? How do you explain the development of civilizations in different places during the same period of time?