In the United States, the 20th century saw a massive social transition in the form of the civil rights movement.This includes legislation and organized efforts to abolish racial and sexual discrimination.

100 years after the Emancipation Proclamation, African Americans in Southern states still lived in an unequal world. There were serious ethnicity equity issues in the United States.

The following outlines three of the main issues with ethnic equity:1 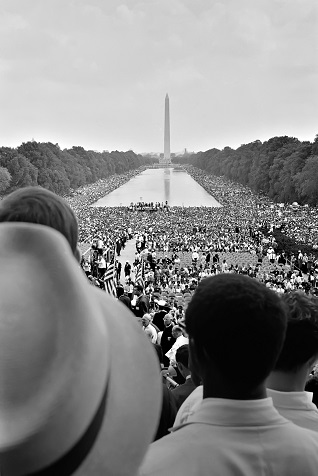 Before 1955, pro-rights strategies included lobbying attempts by the National Association for the Advancement of Colored People.1 By 1955, many African Americans became frustrated with the gradual approaches. Civil rights groups adopted a combined strategy of direct action with nonviolent resistance known as civil disobedience.1  This includes boycotts, sit ins and marches. One of the most famous marches was the March on Washington for Jobs and Freedom, best remembered for the ‘I have a dream’ speech given by Martin Luther King Jr.

Perhaps the most important achievements in African American civil rights are the post-Civil War constitutional amendments that abolished slavery and established the citizen status of blacks and the judicial decisions and legislation based on these amendments.1

The Supreme Court’s Brown v. Board of Education of 1954, the Voting Rights Act of 1965 and the Civil Rights Act of 1968 are examples of historical legislation that passed because of the previous constitutional amendments.1

Sexual equity was also a huge problem in the United States. The Civil Rights Movement focused more on equality for women, but the last few decades have focused on rights for homosexual couples.

First-wave feminism worked on enforcing absolute rights such as suffrage. This evolved into second-wave feminism that was concerned with changing social attitudes towards women. The new feminist movement explored economic equality and reproductive freedom.1

Many American citizens risked and sometimes lost their lives for freedom and equality. These men and women are American heroes who literally changed the world and set precedents that still affect us today. Why are these movements important to us today? They redefined conceptions of the nature of civil rights and the role of government in protecting these rights. They also greatly affected the opportunities now available to women, non-black minorities and disabled individuals.

Image: The famous March on Washington for Jobs and Freedom

Dispossession of the American Indians

I am looking for information about the efforts taken by the American government to "close the West" in the last half of the 19th century. I need to mention the shift in policy towards Native Americans, legislative acts enacted to aid settlement, and ultimately the growth and development of political movements.

On the American Indian Movement (AIM)

For this assignment, please provide some suggestions by choosing one of the following organizations, and how that organization is actively involved in engaging the culture. Possible groups include (but are not limited to): Heritage Foundation Patriot Academy Leadership Institute Liberty Counsel Live Action State specific

The 20th Century, many times has been called, America's century. It is a time when America went from a second tier nation, but industrially, we were a leader, but by the end of the 20th century, industrially, culturally, militarily, if we look at those three things together, we were certainly for the 20th century at the top. The

African and Native American Slavery in the British Colonies

Compare and contrast the first-person accounts to make a central argument about how Norfolkians experienced race relations during the Civil Rights Era (1950s-1960s, and in Carter-Mason's case, the 1940s). Instead of simply summarizing the accounts, make a central argument that articulates your assessment of these individuals' e

Discuss how the views of Alfred T. Mahan helped shaped US Naval development and strategy. What impact did his views have beyond the US?

How did the United States become involved in the politics of Southeast Asia? Describe two key decisions that escalated American involvement and determine their impact. How did a lack of political clarity in declaring the war's objectives affect the military's ability to fight? Describe how students mobilized to protest in th

I need assistance in understading some events from the 1960s: Protestors at the Lincolm Memorial during the MLK's "I have a dream speech". The Freedom Riders headed to New Orleans in 1960. The Watts riots in LA in 1965. Selma marches in 1965. Supporter and political organizers for Robert Kennedy in 1968. Thank you for yo

The Civil Rights Movement and Art

The Civil Rights movement, the Cold War, the Vietnam War, etc. Identify and briefly discuss an artist and a specific work by this artist in response to any of these events.

Sex, drugs, rock and roll, student protest marches, and such would have all been considered "deviant" activities as they ran counter to the values, beliefs, and ideology of our culture at that time; hence the term "counterculture". Discussion Question # 1: Who were the Hippies and how did they influence the culture of the 1960s? Discussion Question #2 Research and report on a current social movement that you think could be defined as a counter culture movement.

Discussion Question # 1: Who were the Hippies and how did they influence the culture of the 1960s? Hippies were generally young, white Americans in their late teens through mid-twenties who were disenchanted with traditional American culture and values. They tended to demonstrate this disenchantment by embracing a lifestyl

Current Challenges to the Constitution

Can you help me to prepare a paper that focuses on the issue of Wiretapping and Domestic Surveillance (National Security) and its implications to an Consequences upon our civil liberties. Include examples and statistical support.

Fifties and Sixties Culture, Consumerism and the Economy Matrix

Ponder how the movements led by Dr. Martin Luther King, Jr. and Cesar Chavez in the Central Valley of California influence how you live today. After viewing the montage of the 1963 civil rights march in the reading below what, in your mind, have we as a nation overcome? In what areas do we still have work to do, and what evidenc

This job chooses one social, economic, or political event from each of the five decades following World War II?1950s, 1960s, 1970s, 1980s, and 1990s. It offers a brief discusson of the impact on the American people.

I need least two references in each decade's. I would like to post 10 for this project which is $3.99x10. Is this ok

Social Movements in the 1960's

The one major social movement born in the 1960's that retained and gathered momentum in the 1970's and after was: a) The civil rights movement. b) The anti-poverty movement. c) The feminist movement. d) The peace movement. e) The hippie movement.