In animals the digestive system is required for not only the digestion of nutrients, but also their acquisition and absorption, and involves egestion which is the excretion of waste products. The gastrointestinal tract (GT) controls digestion and is composed of muscle cells, neurons, absorptive cells and secretory cells.

The process of digestion is aided by digestive enzymes which allow macromolecules to be absorbed and processed by breaking them down into different forms. An example is protease, an enzyme which breaks proteins down into smaller polypeptides. Additionally, symbiotic relationships exist between animals and other species such as bacteria and fungi. For example, human gut flora assists in the breakdown of undigested carbohydrates.

The complexity of feeding strategies varies among different species.  Feeding structures for instance are required in some form for obtaining and processing foods. In different animals these structures may include teeth, tongues, jaws and beaks.

In terms of the digestive system itself, the anatomical and functional specialization of the system has increased overtime, especially when comparing the shift from the two-way gut to the one-way gut. The digestive system in simpler organisms is just a simple gut in which food and waste enter and exit through the same opening (two-way gut).

In more sophisticated animals, the gut is rather specialized (one-way gut). Furthermore, gut morphology differs across all vertebrate classes. A specialized gut can be divided into three regions: the foregut, midgut and hindgut, and within these regions exist different components. For example, the stomach is part of the foregut and the large intestines are part of the midgut. 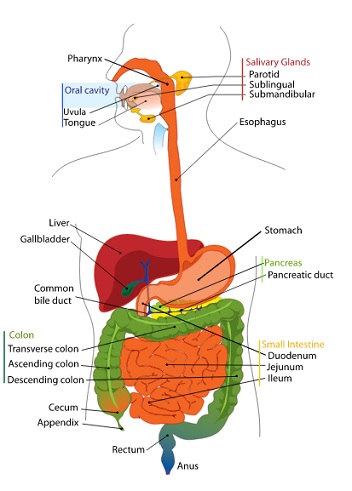 Figure 1. This image presents the human digestive tract. This image has been taken from http://commons.wikimedia.org/wiki/File:Digestive_system_diagram_en.svg.

Effects of Norepinephrine and Acetylcholine on Gut Smooth Muscle

We conducted a laboratory practical in aim to investigate the action of the neurotransmitters acetylcholine and noradrenaline on mammalian gut motility. Upon addition of either of the two drugs we recorded the rhythmic contractions generated by the basic electric rhythm. by plotting the results I was able to draw a sigmoidal cur

Please help with the following problem. Identify and explain the variables that affect the rate of filtrate formation.

Compare and contrast foregut vs. hindgut fermentation and give examples of animals that have either digestive physiology.