The Mann-Whitney U-Test is a nonparametric test which is analogous to the student’s two-sampled t-test. This statistical test is utilized to determine if a difference exists between the two samples being compared. The samples do not need to originate from normally distributed populations, but they should come from populations with similar distributions.

The Mann-Whitney U-Test is conducted using ordinal data, data which is based on rank sums. Since it is a nonparametric test, it analyzes the difference between the medians of two data sets. In addition to utilizing nonparametric, ordinal data, this statistical test should be used when there are more than 5 pieces of data in each sample, but fewer than 20 data pieces in total.

Example: The enjoyment of watching soccer and baseball was rated among 10 randomly selected individuals aged 20 – 25. Each individual was asked to rate how much they enjoyed watching either baseball or soccer, depending upon which group they were in, out of 10. The results are as follows:

In a Mann-Whitney U-Test, the data must be ranked. A rank of 1 is given to the lowest rating between the two groups and if there is a tie for a rank between two ratings, that rank and the subsequent rank get averaged. After this is completed, the ranks for each group are tallied. T1 will represent the ranking for soccer and T2 will be the tally for baseball. 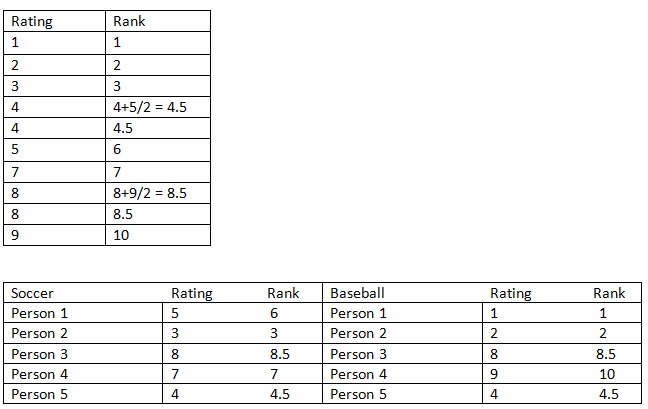 NX = number of people in the larger rank

Then depending on which significance level is being used, a table giving the critical U values for different sample sizes needs to be used to see whether the derived U value is less or more than is expected at those sample sizes. The null hypothesis is rejected if the U value computed is greater than expected because statistically it is not significant.

Nonparametric Test in SPSS and Analysis

The National Association of Home Builders provided data on the cost of the most popular home remodeling projects. Use the Mann-Whitney-Wilcoxon test to see whether it can be concluded that the cost of the kitchen remodeling differs from the cost of master bedroom remodeling. Use a 0.05 level of significance.

Assume that each of the following studies cannot be analyzed using a parametric procedure. For each of the following studies (below), indicate the appropriate nonparametric procedure, and explain why you chose it. NOTE: Would you use Spearman rank-order correlation coefficient, Mann-Whitney U test, Wilcoxon T test, Kruskal-Walli

Use the RENAL.sav file from Norusis and do the following: 1) Mann-Whitney U test (nonparametric) - Use the same variables you used in the Independent Samples t-test from DATA ANALYSIS PROJECT 3 (Assignment 11). - Conduct a Mann-Whitney U test on the scale variable with the nominal variable as a grouping variable.

These are practice problems that are mostly Mann Whitney U and Wilcoxsen analysis. 1) Ten monkeys, five reared with a surrogate (artificial) mother and five reared normally, have been observed over a 10-day period in a group play area. The number of self directed behaviors has been scored for each animal during a 20 minute

Please answer in a single short paragraph. 3. Answer a and b in terms of the modern scientific paradigm, a. Which simple linear regression model should be preferred? b. What desirable trait causes it to be the preferred model? a. Intercept = b = 100 Slope = m = 9 R2= 0.4 P value= 0

Stated below is the complete assignment that I have been assigned. I am confused on how to perform Mann-Whitney test the calculation located on page 706. So the null hypothesis would be HO: M1 = M2; and H1: M1 not = M2. included I should State the decision rule and take a sample and arrive at a decision that I am also having t

Mann-Whitney U test (nonparametric) - Using the variables length of stay (scale) variable and Gender (nominal) - Conduct a Mann-Whitney U test on the scale variable with the nominal variable as a grouping variable. - Copy and paste the output in a Word processor in RTF format. - State the hypothesis to be tested.

(10) Moe's Computer Store hired an advertising agency to prepare two advertisements of comparable quality for their new television-computer wristwatch. To see whether both ads led to the same distribution of sales, Moe hired a statistician to find out. Two random samples were taken on 12 months of the first year of sales for

The study is to find out if the analysis of the data supports a smoking ban or not. I have conducted a Mann Whitney, and N-Par test and discovered that the data is skewed. I need to explain what the results mean in a discussion section, and am unsure because the data is a little random. Can you help? column a = id of bar/pub

Mann-Whitney U and Wilcoxon Matched-Pairs Tests

Conduct and interpret the appropriate analysis.

A researcher was interested in the attitudes towards equal rights among stay at home moms and women with jobs outside the home. She creates a survey that measures attitudes toward equal rights, administers it to a sample of 20 women. However, since the survey is not standardizes, she realizes that the scores may not reflect equ

Can you please do a non parametric test (Mann Whitney) on the figures and give me both the full print out of the calculation as well as an APA summary. For the general print out let me know which program you used. You will find a comparison between control and study group on day 1 and 5. I need to know if there has be