Being anxious to see mommy walking away from you on the first day of preschool is natural; screaming, vomiting, believing the teacher to be a kidnapper and lashing out at everyone around is not. This is an extreme example of the behaviour of a child suffering from separation anxiety disorder, but even with less exaggerated symptoms, it can be a challenge to live with or parent a child with it.

The way to distinguish between normal anxiety and separation anxiety disorder is the same as almost any anxiety disorder - does it interfere significantly with the person’s functioning in everyday life? Here are some of the symptoms that suggest the anxiety merits more attention than usual (the ‘attachment’ may refer to a caregiver or place of security): 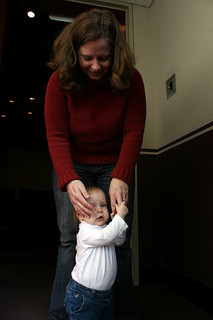 Due to a baby's obvious reliance on its parents, separation anxiety is not typically diagnosed until the child is of schooling age.

Many of the techniques for alleviating separation anxiety disorder revolve around small steps to work up to a clean separation, just as you would wean a child off of parental contact before they develop the disorder. HelpGuide.Org suggests:

Select one of the following theories from our reading, explain the theory and how it relates to infant and toddler development, and write a short scenario that exemplifies the theory. nonorganic failure to thrive, separation anxiety, language development issues

Six-year-old Emily has been referred to you by a Pediatric Psychologist. According to Emily's parents, Emily has been experiencing a great deal of separation anxiety after recently starting first grade. She has expressed to her parents that she does not want to go to school, because it "isn't fun anymore." What started out as in Everything You Need to Know About Informed Consent will explain what it means for a person to give informed consent. It will discuss the things a person must be told and must understand for their consent to be considered “informed”. Everything Yo... READ MORE » ... READ MORE »