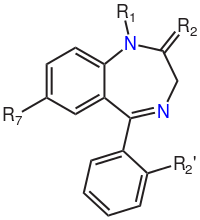 Benzodiazepines are a class of psychoactive drugs used in the treatment of anxiety, muscle-spasms, alcohol withdrawal, seizures, insomnia or agitation. They increase the efficiency of the neurotransmitter GABA by acting on its receptors. Instead of directly stimulating the receptor to which it binds, it increases the frequency with which the chlorine channel opens. This results in an increase of CI-ions in the the post-synaptic neurons, making it less excitable.¹

Benzodiazepines, although less severe than barbiturates, still have a higher than usual risk of dependency and should never be mixed with alcohol. They are shown to be safe and effective in short term treatments, but the risks of psychological or physical effects with long term use are heightened.¹

Benzodiazepines have a large degree of efficacy in short-term management of anxiety disorders, especially Generalized Anxiety Disorder (GAD). Some medical and psychiatric associations recommend it as a second-line choice, after alternative treatments prove unsuccessful until a proper long-term treatment can be administered.¹ A tolerance builds fairly quickly, contributing to the risk of dependency. Although it is very effective in treating symptoms of panic disorder in the short term, the effectiveness decreases with time so most patients are typically weaned onto alternate treatments after symptoms subside.¹ Specific drugs in this class include rohypnol, diazepam (Valium) and clonazepam.

Discuss the use of SSRI medications for the treatment of general anxiety disorder (GAD). If you were a psychologist or counselor who could prescribe psychotropic medications, would you choose SSR'Is or benzodiazepines to treat GAD in particular? Explain your choice.

How does alprazolam help anxiety?