Many Americans seem to believe that America’s colonization began with the Massachusetts Bay colony and the Europeans who founded New England. In reality, they were not the first people to come to that part of the globe, or even the first British ones. The first permanent English colony was Jamestown, Virginia. Virginia was named not after Elizabeth character but her chastity in 1607.¹ 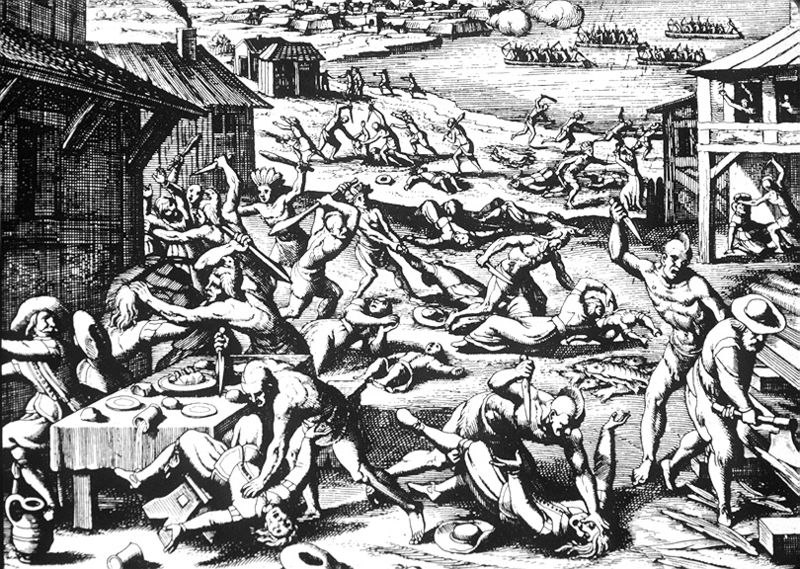 Jamestown was a project of the Virginia Company. The company hoped they would find gold in the area. In its first year, half of the colonists died because they were not farming the land effectively.¹  By 1610 the colonists had dwindled to 65, making the land unattractive to potential new colonists. This inefficiency lead to the first shipment of African American slaves to Virginia in 1619. By 1624, Virginia was producing 200 000+ pounds of tobacco per year, increasing to 30 000 000+ in the 1680s.¹  This Virginian society was overwhelmingly male and ¾ of those males were indentured servants.¹

Although not the first, Massachusetts Bay colony is probably the most well known colony. Most of the English men and women who settled New England were Protestant puritans who called  themselves congregationalists.¹ Pilgrims, who are different from puritans wanted to separate themselves completely from Church of England.¹  These pilgrims and puritans were meant to colonize Virginia but ended up founding Plymouth in Massachusetts.

These pilgrims landed right before winter with a scarce supply of food and animals. Half of these settlers died in the first year and the others survived only with help from the Indians. To thank them for their help, the pilgrims organized a feast called Thanksgiving for the natives.

The pilgrims struggled in New England until 1691 when they were subsumed by the Massachusetts Bay colony.¹ This colony was chartered in 1629 and unlike Virginia they had a greater degree of self government. In Massachusetts, social unity was more more important because puritans believed common good held priority over the needs of individuals.¹

New England towns were run democratically in theory, but power generally rested with the elite church members.¹  This was indisputably more fair than in England but there was still a sense of inequality. Puritans really did foster equality in one sense, wanting everyone to be able to read the bible. They encouraged literacy among everyone, including servants.¹

The Significance of the Enlightenment and the Great Awakening

Assess the significance of the American Revolution to the following groups: colonists, slaves, native populations, and women. Discuss the impact of the Enlightenment and the Great Awakening on colonial society in America.

Factors leading the American Colonists to the Revolutionary War

1. Discuss the impact of the Enlightenment and the Great Awakening on colonial society in America.other over time. 2.Explain how the colonists responded to the new acts, and trace the evolutionary process that brought the colonies closer to rebellion. 3.Assess the significance of the American Revolution to the following

George Washington and The American Revolution

Describe, in detail, an individual outside of the English monarchy who played an important role in helping the United States become a nation, such as George Washington.

Discuss the significance of the American Revolution to the following groups: colonists, slaves, native populations, and women.

President Monroe and His Doctrine

In this Solution, students will understand why the Monroe Doctrine was a symbol of nationalism for the United States.