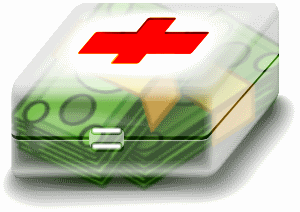 Whether government- or privately funded, it's important to know how a healthcare system's budget is split up in order to track and possibly reduce costs, or funnel more money into needy areas. Naturally, the proportions of budget allocated to different departments of healthcare will depend from country to country and often between regions within those countries as well. However, there are trends that make it possible to outline the basic concerns in healthcare spending and compare how these concerns are met or aggravated across different countries.

The major components of a healthcare budget that must be addressed and funded are:

Many of these share requirements such as research, equipment maintenance, personnel salaries, building costs, medical supplies and distribution, but some have additional concerns as well. For example, hospitals must allow patients to stay for long periods of time and so require catering and heavier cleaning funding factored into their budgeting.

Another important issue in healthcare spending is public and private sectors. Many western countries have around a 70-30% ratio of government-funded to privately funded, with the notable exception of the USA where more than 50% of healthcare was done by the private sector in 20131. In America, there is no blanket government-funded healthcare at the time of writing, which makes the 'Obamacare' proposals a hot political topic. As it is, the government only provides healthcare for children, disabled people, veterans and the elderly. Everyone else must get insurance through their employer or independently and, as not everyone is employed or able to afford that, more than one in ten Americans2 must simply put up with their ailments or attempt to receive uncompensated (charity) care. Of course, America is not the only country with this kind of problem, but they may be the most prolific case today. 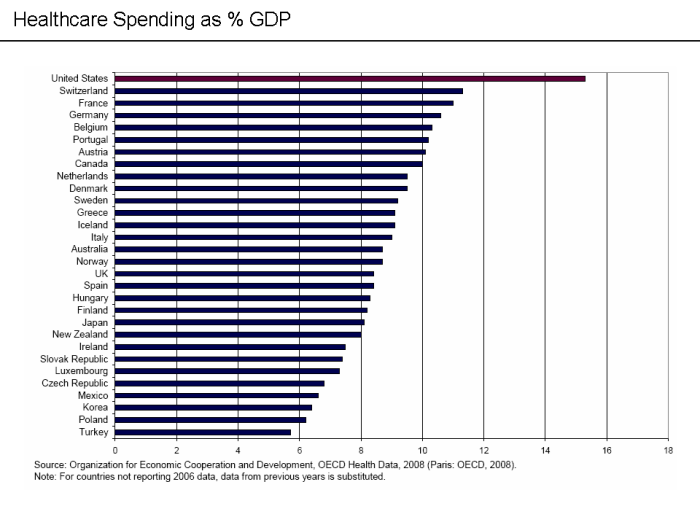 Perhaps coincidentally, Americans pay the most for their healthcare out of the 34 member countries of the Organisation for Economical Co-operation and Development, according to the OECD's 2011 survey3. 17% of their GDP goes into healthcare, with the next highest being the Netherlands at 11.9%. No healthcare system is perfect, and since it is literally a matter of life and death, debates regarding healthcare budgets can be quite heated. At the present, it seems more eastern European countries have the best model of government-funded healthcare however, with Norway, Denmark, Sweden, the Netherlands, and Austria and Germany consistently coming out near the top of impartial evaluations.

Industries in the health-care sector

Shifting From Volume to Value

Healthcare reform is changing the delivery and financing of care, creating a shift from volume-based, fee-for-service care, to value-based care focused on efficiency and quality. This shift has led to changes in health insurance and healthcare delivery markets. I need an analysis of the economic principles that are driving th

Decision making-Proposal for a 24 hour pharmacy

GYou are the chief financial officer (CFO) at a community hospital. One of the comments that has come back from patient surveys is the need for a commercial 24-hour pharmacy within the hospital. In this way, patients or their families will be able to fill prescriptions and begin taking ordered medication right away instead of wa

Discuss the advantages and disadvantages you see associated with annuities vs. conventional investments in securities like stocks. In your opinion, is it better to make investments that generate ongoing annuities payments, to invest in the equity market, or combining the two? Please provide references and a min of 250+ words.

What are the major differences between fee-for-service and capitation payment methods? What provider incentives are created under each of these methods? Which of these two payment methods carry the least risk and the most risk for providers? Please provide references and a min of 250 + words.

In a 500 word assignment, discuss why it is so expensive to produce one medication. Be sure to cite your references accordingly. Submit as an APA formatted paper.

Cost Of Prescription Drugs For Americans

Micro and Macro Economics in Healthcare

Given the trait of human behavior that it is a lot easier (and more fun) to adjust spending upward rather than downward, does it take longer for individuals (micro) or nations (macro) to adjust to changes in income/spending? Why or why not?

Can we learn from other counties to improve our healthcare system and its outcomes? What other examples are there that would result in improving health outcomes and better managing expenditures?

Does a patient's choice of provider and access to care will be limited under Accountable Care Organizations (ACO)?With an ACO, you'll likely have fewer repeated medical tests because your doctors and hospitals will share information and coordinate your care. Is this a reality or not? In what ways can an ACO succeed in both deliv

Critical analysis of healthcare policy issues in the US

What are some of the critical healthcare policy issues related to access to care, cost of care, and quality of care within an organized hospital system? Evaluate this question from the perspective of each of the following: A hospital administrator, a physician, a patient, a politician, a tax payer, a Board Member and a Staff.

Please help with the following problem: Discuss various means of realistically funding pay-for-performance (P4P) and what market and regulatory forces might affect such funding.

Use of the Payback Period

We hear the terms net present value and internal rate of return quite a bit. What are these two investment models? Why do we use them? Do I have to use both? Please read the article: Juhász, L. (2011). NET PRESENT VALUE VERSUS INTERNAL RATE OF RETURN. Economics & Sociology, 4(1), 46-53,126. After reading the article and doing

Capital raising for an organization

There are times when an organization needs to raise capital. There are several ways to do this. Raising capital will be the topic of this assignment. Using the websites provided in the background section and your own research, please respond to the following questions. 1. Identify and discuss 4 ways an organization can raise ca

The cost of health care

Please help answer the following questions: Stakeholders: Describe the role of major stakeholders in the problem. How have federal and state governments and the health care industry worked to address this issue so far? What have been the successes and failures of their attempts?

Discuss why the current health care system is in turmoil. Identify two major problems of health care and analyze the impact of each of the chosen problems on consumers and the community. Describe the benefits and risks of national health insurance.

How does an EHR impact the financial and billing side of healthcare management? What are some of the advantages of utilizing such a system and how can management utilize these technologies in order to improve administration?

Analysis of capital purchase of a bladder scanner, costing more than $5,000 that your company could benefit from. Identify the goals that expenditure would support. These goals might include revenue, improvement, productivity, quality assurance, employee development, or management services consultant packages. Who are the

Beginning in 2015, CMS (Center of Medicare and Medicaid Services) will introduce another quality program which will reduce hospital payments due to HAC (Hospital Acquired Condition ) not present on admission . What would you incorporate in your strategic planning or management so that you do not get much reduction due to HAC?

The "Outpatient APC" reimbursement changes quarterly and some end up being packaged to the associated main procedure that are not paid separately anymore. For example, how will the changes mess up your revenue budgeting or forecasting and why?

Need help with a healthcare class. See assignment below. The funding and reimbursement aspects of health care delivery are complicated, transaction-oriented, and subject to applicable laws and regulations. The sheer volume of transactions and myriad nuances of patient care make the process of documenting services delivered

White Paper Need some good advise on what to do to get started In response to your PowerPoint presentation (Unit 7), you have been asked to draft a "White Paper" that will be distributed to the Board of Directors and major funders. In your report (seven to ten pages), you will expand upon the points presented in your Pow