A documentary film is non-fiction and may re-tell the stories of actual individuals or detail other general stories and phenomena. In terms of maintaining historical records, for example the lives of important political figures or the details of world events, documentaries are efficient tools.¹

Documentary films are representative of a method for recording real life, real people (or even animals) and real events.¹ Although documentaries are based solely on true facts, these films in many cases also try to convey a particular opinion or overall lesson/message. In fact, within the educational system documentaries are often used as learning tools. 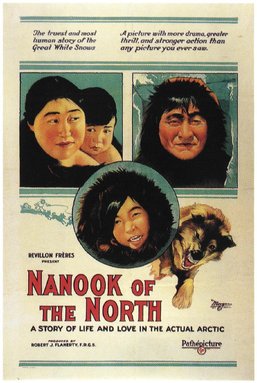 The predecessor to the modern documentary

Even though the term documentary is thought to be coined from the 1920s, documentaries began to surface before that time period, since before the 1900s.¹ However, pre-1900 documentaries were much simpler than those existing today, being composed of single-shot moments. For instance, shots captured of men leaving a factory after a long day’s work or of a boat about to take sail, are examples of early documentaries from this time period.¹

Essentially, documentary films allow individuals to not only enjoy their cinematic experience, but also gain real and valuable knowledge. A way to think of documentaries is as films which symbolize the visual expression of reality.¹

What is a documentary? From Nanook of the North to the Present

The question "what is a documentary?" aims at suggesting the complexity within documentary as a film type/genre. Other questions arise from the main inquiry, like: is that different from fiction? If yes, in which terms? Is documentary a homogeneous manner to make films, or there are documentary modes? Are these modes rigidly sep

Nanook of the North: Film Notes

Using the film "Nanook of the North" please assist with the following: 1. Narrative Structure How is the story told through the use of cinematography, scene set up, and editing? 2. Social and Cultural Implications What do you perceive the filmmakers vision and the intent was in making this film? In addition what ways do

I need help to answer the questions below: Recently, with the introduction of directors such as Michael Moore and Morgan Spurlock, the general purpose of documentaries has seemed to change. Is it immoral to have an agenda when filming a documentary? Should the agenda of the filmmaker be obvious when viewing a documentary, obs

The popularity of documentaries is briefly inferred.

In recent years, a number of documentaries have gained considerable attention, for instance those such as â??An Inconvenient Truth, Food, Inc., and Super Size Me. Name some characteristics that are likely to be found in documentary films. How do they contribute to the sense of realism and immediacy in the documentary? Can docum