Insects are invertebrates which have an external and internal anatomy which is structured and functions widely differently from vertebrate species. Understanding an insect’s anatomy and physiology allows us to realize how insects have evolved to live on the planet and teaches us how to control insect problems which may arise.

The external anatomy of an insect is very distinct. Insects have a hard external covering, called an exoskeleton, which is composed of plates and this layer also possesses flexibility due to the sutures they have connecting the plates (these are like joints). The exoskeleton maintains a permanent size, not growing throughout an insect’s life. However, insect’s molt multiple times as they grow. In the process of molting insect’s shed their current exoskeleton so that a new layer underneath can emerge.  It is important to note that vertebrates do not have exoskeletons, but have endoskeletons instead. 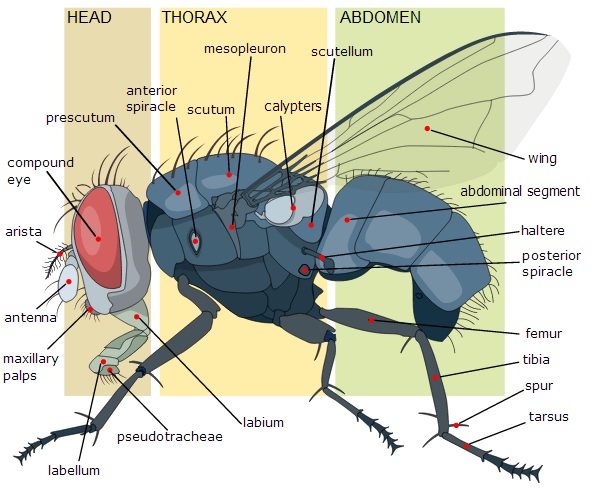 Figure 1. This diagram presents the three major body divisions which insects possess. Each of these three regions has been broken down further to illustrate the parts which they are composed of. This image has been taken from http://commons.wikimedia.org/wiki/File:Housefly_anatomy-key-en.svg.

Insects are an extremely diverse group of species considering that they are the most dominant life form on Earth. Thus, this discussion only begins to discuss the anatomy and physiology of insects as it is a rather expansive subject.

Orders of the Insecta Class that are Significant to Public Health

I have to select two orders within the Insecta class that have significance on their public health and explain the rationale for the choices. Please help.

Physiological Challenges of Freshwater to Insects

What are the physiological challenges an organism (such as a waterbug) might experience in a freshwater lake of the following conditions: depth of 200 m, water cold (approx 10 degrees celcius on surface), eutrophic, poor visibility, pH approx. 4?

You were picking blackberries and what you thought was a berry turned out to be a stinging insect. You removed the stinger, but your hand became swollen and sore. What type of hypersensitivity reaction occurred? What will happen the next time you are stung? Why will these events occur? You speak to an allergist who says you can