Queer theory is a sociological perspective that takes account of the cultural products, social practices, and institutions which together bestow on heterosexuality a sacred status.¹

As an academic movement, queer theory is associated with the 1990s, although it can find its roots in the 1970s work of Michael Foucault, Teresa de Lauretis and Gloria Anzaldua. These academics questioned and explored the ways in which western social structures create and enforce rigid standards of sexual regulation.¹

Queer theory builds  on the foundation that feminists and those who study gay/lesbian studied. Feminist theory challenges the idea that gender is part of the essential self and gay/lesbian studies perform a close examination of the socially constructed nature of sexual acts and identity.¹ Queer theory expands its focus to encompass any kind of sexual activity or identity that falls into normative and deviant categories, focusing on the clashes between sex, gender and desire. 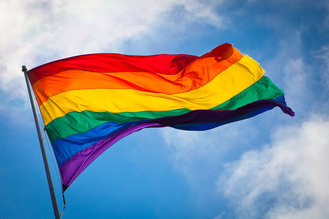 Queer theory is associated with lesbian and gay subjects, but the framework also includes topics like cross-dressing, intersex and gender identity, gender ambiguity and gender-corrective surgery.¹ The term used to be a slang for homosexual and was often used for homophobic abuse. Now it is used as more of an umbrella term for sexual identifications and the study of those identifications.

As a framework, queer theory aims to debunk the myth of stable sexes, genders and sexualities out from a poststructuralist perspective of identity being a constellation of multiple and unstable positions.¹

An important part of queer theory is the HIV/AIDS discourse. There are several in which the disease has affected queer theory:

Paper should include the following: • Introduction • General description and unique attributes of the LGBT(subculture) • Sexual themes, behaviors, activities, expression, attitudes, risks, etc. • How the LGBT (subculture) sexual themes are similar to and different from current sexual attitudes and messages in the Uni

Acceptance of the homosexual community

There are certain aspects of each culture which will never change and perhaps will never be accepted outside of that particular culture. While I do not believe that cultures will ever truly merge, I will say that I believe that understanding will continue to grow. Within each culture there are subcultures that are now (more) acc

Cross dressing and its economic gain