Canadian federal, provincial and municipal governments all hold elections for their respective legislatures. Federally, all Canadian citizens of the age 18 or older are eligible to vote according to the Canada Elections Act.

Canada uses a plurality voter system, wherein 308 seats in the Parliament of Canada’s House of Commons are all elected from their respective 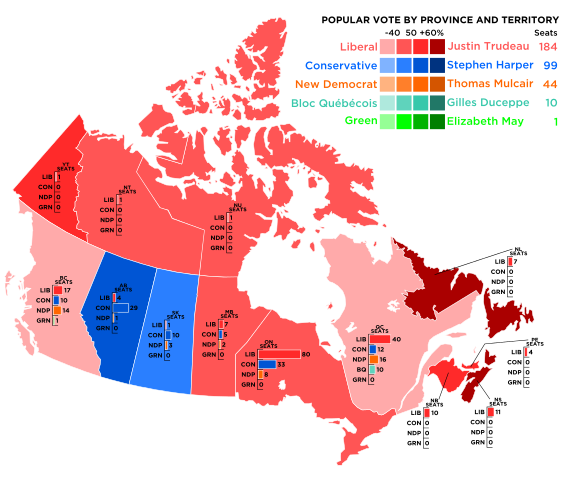 ridings. Canadians vote for their local Member of Parliament who represents that particular constituency in the House. The leader of the party with the most seats in the House is generally Prime Minister, although independent members may stand for election. If the government holds less than 155 seats they are a minority government. This means that the House can hold a non-confidence motion. If the government loses a non-confidence motion, the Prime MInister will ask the governor general to hold an election.

A regular general election not called because of a non-confidence motion is always on the third Monday in October four years after the previous election. Elections for particular seats between general elections due to death or resignation of a member are called by-elections. The date is also determined by the governor general. Between elections, the party distribution in the House can change. Members are legally permitted to ‘cross the floor’ to another party or become an independent member at any time. By-elections can also alter this distribution.

The popoular vote by province and territory in the 2015 general election. Source: Wikimedia Commons

Canada’s provinces also have a plurality voting system that is used at the federal level. Their riding distribution is identical to their federal ridings. All provinces are legally permitted to change their electoral system without permission from the federal government.

Canada’s last general election in 2011 saw the Conservative Party of Canada gain a majority government from a minority and the NDP gain an unprecedented and shocking amount of seats from the Liberal Party of Canada. Graph 1 illustrates the popular vote by province and territory.