When people speak of Vikings, they are typically referring to the Germanic people who sailed, raided and founded settlements for three centuries along coasts and rivers. These locations included mainland Europe, Ireland, Great Britain, Normandy, Orkney, Iceland, Greenland 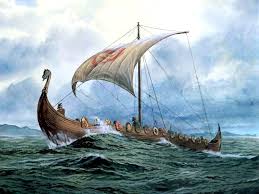 The Vikings reached as far south as North Africa and as far east as Russia and Constantinople as looters, traders and mercenaries. The Vikings who operated under the famous Leif Ericson reached North America with expeditions to present-day Canadian Labrador, Maine and Massachusetts¹.

Vikings had some of the most sophisticated naval technology and skill sets to be found in the world in the Middle Ages. They generally rode two classes of ships depending on the purpose of their voyage. They had quick and nimble longships for exploration and warfare and the large knarrs to transport cargo.

Viking voyages decreased and eventually ended with the anarchic conditions of that led to introduction of Christianity to Scandinavia in late 10th and 11th centuries and the emergence of the three great Scandinavian kingdoms¹. Much of Europe started catching up to the vikings in metal work and maritime technology towards the end of the Viking age. This increased their defenses and contributed to the decline of Vikings.

Explain why would a person like to complete an internship with the Michigan Department of Corrections Public Information and Communications office? Create a writing sample explaining the differences between parole and probation? What would be a person career interests, goals and plans in the field of a Criminal Justice Major?