The light reaction is a process requiring the input of carbon dioxide, water and light, in order to produce the reactants required for the dark reaction, the second stage of photosynthesis. The light reaction occurs in the thylakoid membrane of the chloroplast and involves two photosystems, photosystems I and II, and the electron transport chain.

The photosystems of the light reaction are composed of photo-pigments, such as chlorophyll and carotenoids and are therefore able to absorb light energy. Photosystem I, also known as P700, and photosystem II, also known as P680, are embedded in the thylakoid membrane. The number associated with the photosystems represents the wavelength of light that the chlorophyll α molecule associated with these systems is best at absorbing.

In the light reaction, the photosystem II complex is embedded first in the thylakoid membrane, followed by photosystem I and then an ATPase pump which makes ATP using the proton motive force. Furthermore, there are two electron transport chains:

The electron at photosystem II is first to be struck by light energy. This excites the electron causing it to bounce around from molecule to molecule until it reaches the primary acceptor of the specialized chlorophyll α molecule named the reaction center. The electron then will move from photosystem II down the electron transport chain, transferring from lower and lower energy states. During this process ATP will be generated by the electron transport chain and hydrogen ions will be pumped across the membrane creating a proton motive force which is needed by the ATPase pump later to create ATP.

Eventually, this electron will reach photosystem I and will become excited again once it gets hit by another set of photons. This allows the electron to travel again from its high energy state to lower energy states, releasing energy which will end up in the NADPH, one of the final products of this reaction.

Additionally in the light reaction, water gets oxidized meaning that it loses an electron. This lost electron is what replaces the initial electron at photosystem II which travels across the thylakoid membrane. There is a water oxidation site at photosystem II. 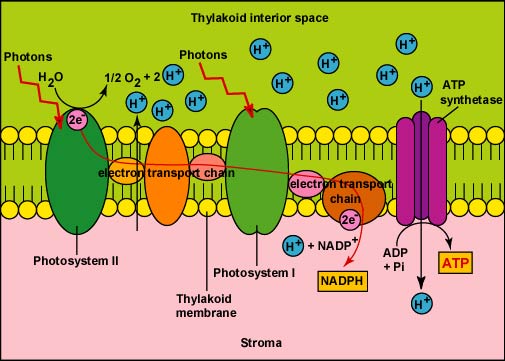 Figure 1. This figure depicts the processes which take place during the light reaction. As is shown in this schematic, NADPH and ATP are the end products of this reaction. This image has been taken from http://student.ccbcmd.edu/~gkaiser/biotutorials/photosyn/fg5.html.

Why is no glucose produced if a plant is kept in the dark, even though the sugar producing reactions are called light-independent reactions?

Why is no glucose produced if a plant is kept in the dark, even though the sugar producing reactions are called light-independent reactions?