Fish are aquatic species which display a large range of diversity due to the vast array of habitats which they can survive in from streams found in high mountains to habitats in the deep ocean. The earliest fish which came about were the Chordates and from there fish have evolved tremendously.

In terms of their anatomy, fish possess many of the systems which are found in humans. Some of these systems include:

In addition to these systems, fish also have a muscular system, reproductive system and an immune system. Evidently fish are rather developed vertebrates. All of the systems which exist in fish have evolved to function in a way which allows fish to survive in all parts of the globe which they inhabit. 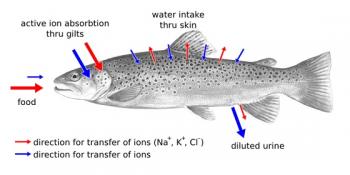 Osmoregulation is a process which maintains the homeostasis of an organism’s water content through the regulation of the osmotic pressure of body fluids.

Detection of Movement by Fish

Why would it be important to detect water movement and vibrations?

Locate a diagram of an organism with the main organs and structures labeled. help in explaining how the organism in the diagram has evolved physiologically to become suited to its environment