The environment of evolutionary adaptedness (EEA) is the set of historically recurring selection pressures that formed a given adaptation, as well as parts and characteristics of the environment that were integral for development of the adaptation.¹ This concept of the environment to which a particular evolved mechanism is adapted was first introduced as a portion of John Bowlby's Attachment Theory. 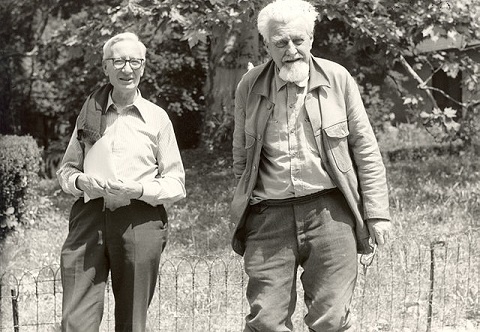 issues in the Pleistocene environments - beginning 2.6 million years ago and ending 12,000 years ago.¹ These issues include growth, differentiation, mating, relationships and maintenance.

It should be understood that the EEA is very different from the society we live in today. Humans now live in larger groups, have less cohesive cultures and less stable identities and meanings.¹ Hunter gathering societies lives in the EEA and many evolutionary psychologists look to surviving hunter-gathering societies, although it is questionable how much they actually reflect their ancestral cultures. Researchers can also observe great apes such as chimpanzees and baboons for some insight into the behaviour of those who lived in the EEA. There is a lot of dispute in the field whether or not psychologists have overemphasized the similarities between humans and great apes.

Konrad Lorenz ('The father of ethology') and Nikolaas Tinbergen.

How do social norms influence human behavior and beliefs about the environment? What are some possible solutions that could successfully change behavior and habits in order to lessen negative environmental impact?

How do environmental cues shape human behavior? How can behavior be modified to support sustainability and how this can limit a negative impact on the environment?

Milestone in the development of environmental psychology

Temperature and Other Aspects of Weather

How does temperature and other aspects of the weather, such as wind and sunlight, affect you? Have you ever considered weather to be a stressor in your life? Why or why not?

How do natural disasters affect individual levels of stress in a community?