Diffraction is the phenomenon which explains a wave when it encounters an obstacle. The diffraction phenomenon is described as the apparent bending of waves around small obstacles and the spreading out of waves past small opening. Effects similar to this occur when light travels through a medium with a varying refractive index. Diffraction can occur with different types of waves. Physical objects have wave-like properties and therefore diffraction also occurs with matter. It can be studied according to the principles of quantum mechanics.

Diffraction can occur whenever propagating waves encounter changes. The effects are most pronounced for waves whose wavelengths are roughly similar to the dimensions of the diffracting objects. If obstructing objects proved multiple closely spaced opening, a complex pattern of varying intensity can result. This principle is due to the superposition or interference of different parts of a wave that travels to the observer through different paths.

Diffraction effects can be seen in everyday life. The common examples are those involving light. For example, the closely spaced tracks on a CD or DVD displays diffraction which is seen through the formation of a rainbow pattern. Diffraction in the atmosphere of small particles can cause a bright ring to be visible around a bright light source such as the sun or moon.

A slit which is illuminated and diffracts the light into a series of circular waves. 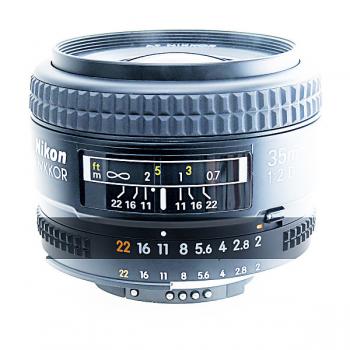 An aperture is an opening through which light travels. 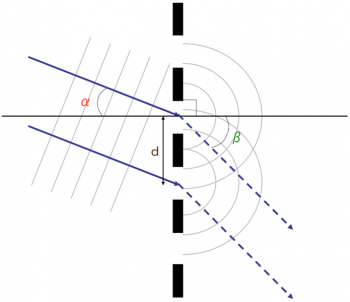 Grating splits and diffracts light into several beams which travel in different directions.

Number of lines per centimeter on the grating

The yellow light from a helium discharge tube has a wavelength of 587.5 nm. When this light illuminates a certain diffraction grating it produces a first-order principal maximum at an angle of 1.247°. Calculate the number of lines per centimeter on the grating.

Part 1: The first-order line of 577 nm light falling on a diffraction grating is observed at a 13.6° angle. How far apart are the slits? Part 2: At what angle will the third order be observed?

1). A piece of curved glass has a radius of curvature of r = 10.0 m and is used to form Newton's ring. Not counting the dark spot at the center of the pattern, there are one hundred dark fringes, the last one being at the outer edge of the curved piece of glass. The light being used of 654 nm in vacuum. What is the radius R of t

A transmission grating is used to study the spectral region extending from 480 nm to 500 nm. The angular spread of this region is 20 degrees in the third order. 1.) Find the line density (number of lines per centimeter) of the transmission grating. Answer in units of lines/cm. 2.) How many orders are visible? Pl

Hi. Can someone please show me how to do the following problem? Thank you. "A diffraction grating has 2200 lines/cm. What is the angle between the first-order maxima for red light ( = 690 nm) and blue light ( = 410 nm)?"

White light strikes a diffraction grating (540 lines/mm) at normal incidence. What is the longest wavelength that forms a third-order maximum?

What is the wavelength of the light shining on the grating?

diffraction angle of a transmission

What is the diffraction angle for the first-order image produced by a transmission grating with 5800 lines/cm illuminated by monochromatic light with a wave length of 4920 angstroms?