What is legal culture?

Legal culture has been talked about in legal discussions over the last 20 years, specifically in connection with Europeanisation of private law.¹ Legal culture is considered important, but an exact definition has yet to be agreed upon. It refers to multiple different ideas, which at times are not properly separated. The term legal culture is sometimes used interchangeably with the terms legal family or legal tradition.¹ Legal sociologists understand legal culture as the values, ideas, and attitudes that a society has with respect to its law.¹ Other times, legal culture itself is seen as a value and placed in opposition to the barbarism of totalitarianism.¹

There is an interrelationship between culture and law. There is a necessity for law to be adapted to the geographic features of the country and the cultural characteristics of its people.¹ Legal culture represents the cultural background of law that creates the law and which is necessary to give meaning to law.

Racism and the law

There is such a thing as institutional and systemic racism in the judicial system of the USA and abroad.² Race issues are so fundamental in American society that they have become an integral component in life as in law.² In turn, certain demographics are more visible in certain aspects of society. Some people believe that racial differences produce inherent superiority in European Americans.² As a result, people of color are negatively affects by judgments or actions that are directly or indirectly racist, and these beliefs trickle down in the American judicial system. Institutions can behave in ways that are overtly racist (for example, excluding people of color from services), or inherently racist (for example, adopting policies that result in their exclusion).²

The notion that race is visually obvious and that its salience stems from self-evident visual distinctions fundamentally orients law's most robust mechanism for governing race and racial discrimination: equal protection.²

There are many modern day examples of racism within the law.³ 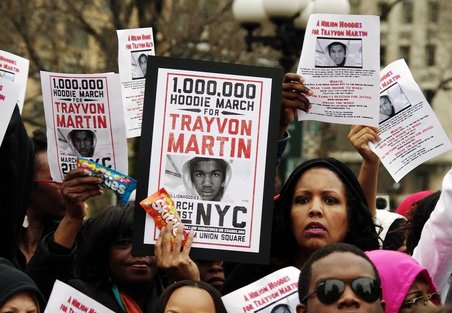 One of the most recent, internationally-known incidences was the killing of Trayvon Martin by George Zimmerman, a murder understood as "racist vigilantism."³ Every day, the same racist vigilantism occurs, and is legal and officially sanctions because the perpetrators are representatives of the American criminal system. For example, the "stop and frisk" policy in New York City directs police officers to target young men of color.³

Although it was immediately clear that Zimmerman murdered an unarmed teenager, he was not charged with any crime. Florida's "Stand Your Ground" self-defense law allows individuals to use deadly force if they "reasonably believe" they are being threatened with death or serious injury. In this case, Zimmerman had been stalking Martin because he believed the boy was "suspicious."³ This is an example of a law which legally allows people to be racist, or to react based on racial prejudice.³

Aside from its presence in national law, racism plays a large role in capitalism. Its role is to keep the working class at bay (economically, socially, and politically).³ It keeps the working class as a whole divided, rather than united against its common enemies.³ This a classic example of divide and conquer.