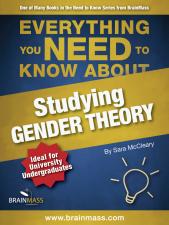 Gender history is a popular field (and growing), but it is not always as straightforward as some may think the name suggests. When studying it, there are specific questions to ask, pitfalls to watch out for, and ways to read sources, for instance. This eBook will act as a practical guide for anyone who wants to be sure they are headed in the right direction when studying gender history, no matter the time period.

This book is ideal for all university undergraduates who are studying gender history. Some senior high school students may find it useful as well.

For decades centuries, really the discipline of history meant simply the study of great men and their politics. There was no examination of racial discrimination, no consideration of differences between classes, and certainly no notion that the study of masculinity or femininity would be worthwhile. It has really just been since the beginning of the twentieth century that these subjects came to be fair game for historians, but it was not until even later - the late 1970s and early 1980s that gender became a topic of discussion.

Today, universities around the world examine the history of women and men, either together or separately, in a variety of contexts. For example, many professors guide their students through a study of women in the ancient world, allowing students to see that women were once far more revered for their reproductive abilities than they are today. Having gained this perspective, those students can then go on to explore the progression of the subjugation of women who started it? Why, when, and where?

Another example of such a subject that is becoming increasingly popular is the idea of masculinity in the twentieth century. Why is it so important to some men that he is his family s breadwinner? How did, for instance, the world wars impact western society s idea of what was manly? Has this changed over time?

One final example: gender and colonialism often go hand-in-hand as the main theme of courses and monographs alike. Those examining this concept will question how gender ideals impacted colonial efforts; so, for instance, how did European women influence the settlement of New England? Or one could ask what part ideas about masculinity played in the North American fur trade.

These are of course, only a few broad examples of the potential subjects to be studied in the field of gender history. One thing these, and all other topics within gender history, have in common, however, is that they are helping historians to get away from the old histories in which there was no recognition that femininity or masculinity played a role in events. Now we are coming to a clearer, more thorough understanding of our past.

This eBook strives to assist students tackling these or other subjects related to gender history. By having a firm grasp of the basics of the subject, students will be better able to conduct important studies of their own and hopefully add even more to our understanding of this diverse and interesting topic.