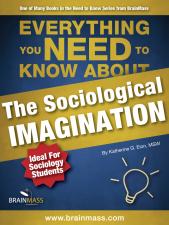 Dr. Mills developed the sociological imagination at the end of a very short career as a sociologist. C. Wright Mills died of a heart attack at the age of 46. In his career, Mills transformed the way sociologists study and discuss social trends and their ultimate effect on the individual.

The theory of the sociological imagination continues to impact the study of sociology well into the post-modern age. The idea was and remains a revolutionary concept that transformed the study of society. C. Wright Mills did not live to see his idea come to its full fruition. Undoubtedly, his contribution to the social sciences will remain a contributing factor to the better understanding of individuals and society well into the future.

This book is ideal for Undergraduate and Graduate Sociology students. Any students studying sociology are encouraged to be familiar with the ideas advanced by C. Wright Mills.

The sociological imagination can best be described as a method of understanding the individual through the individual's history; within the boundaries of the present as history has fashioned society. In other words, through understanding the individual within his or her own point and time in history, along with biography, a means of making scientific conclusions about both society and the individual can be reached. The concept is similar to the intense study of a single cell to understand the complexity of the entire organism. The sociological imagination is a means to understand and theorize about society as a whole through studying an individual's role in the community. Through studying a person's history within the parameters of a larger history, the social scientist can expand upon those factors which shape the individual and in turn effects society-at-large. C. Wright Mills advocated the use of the sociological imagination as a powerful tool for change, specifically in relation to public policy and its effectiveness in preventing, solving, or exacerbating social problems.

For example, as a means to define poverty as both an individual and a pervasive social problem, the social scientist would first study the background of the individual along with the historical roots of poverty. Historically, a lack of educational resources contributes to those living at or below the poverty level. An individual who lacks the opportunity to access educational resources contributes to generational poverty. The problem extends to the fact that those who live in poorer neighborhoods have lowered access to quality public education. Resolution to the problem lies in providing equal access to quality education in all areas, regardless of income. C. Wright Mills theories were among the most controversial ideas in the 20th century and remain significant to sociological thought today.

C. Wright Mills was born in Waco, Texas August 28, 1916. By the time he received his undergraduate degree from the University of Texas at Austin in 1939, he had already published articles in two sociological journals. Mills was a prolific writer and published half a dozen texts along with hundreds of sociological articles and pamphlets. Mills was married three times and had three children. He suffered a series of heart attacks throughout his life and died March 20, 1962 at the age of 46. In 2000 Mills daughters published his personal letters and writings to shed light on their enigmatic father and his forward thinking process.