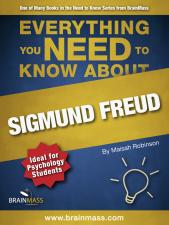 This book is a study of the work of Sigmund Freud (1856-1939), the pioneer of psychoanalysis. The first part is an overview of his early life and training. The remainder of the book consists of a discussion of his major works and research. Freud's most significant contributions to psychoanalysis, which began in the 1900s, are discussed in detail from when he abandoned the use of hypnosis, to when he substituted the investigation of the patient's spontaneous flow of thoughts, called free association, to reveal unconscious mental processes. A highlight of the book is a chronology of the stages of his professional career, intermingled with an exploration of his theories and research endeavors.

This e-book is a detailed presentation of Freud s theories and concepts that were incorporated into psychoanalytic practice and doctrine. It chronicles how Freud developed psychoanalysis, a therapeutic process of accessing the unconscious and resolving the conflicts that originated in childhood with a mature mind of an adult. An explanation is provided about how Freud used psychoanalysis in an attempt to reconstruct the personality by examining free associations (spontaneous, uncensored verbalizations of whatever comes to mind) and the interpretation of dreams.