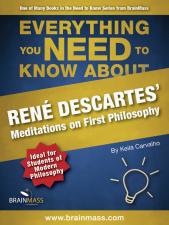 This book offers full explanation of Descartes' famous work, Meditations on First Philosophy, as well as a short biography of his life and a list of his works.

This book is ideal for students of modern philosophy, epistemology or another philosophical study concerning rationalism or mind/body dualism

René Descartes is one of the most well known French philosophers. He is most famously known for his phrase, I think, therefore, I am (cogito, ergo sum), but for the Philosophical community, his ideas brought about the beginning of the era of modern philosophy and contributed to epistemological and metaphysical thought. In his famous work, Meditations in First Philosophy, it was Descartes main goal to reorganize his knowledge so that he could be sure that everything he was accepting as true was indeed the truth. Once he had laid out his solid foundations for knowledge, he attempted to prove the existence of God, and also that there is a separation of the mind or soul and the body. It is important for students of philosophy to have a solid understanding of Descartes arguments so that they can understand the philosophies of those who came after Descartes.