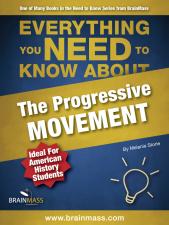 This eBook describes a widespread reform movement that took place during the early years of the twentieth century. During this time the United States was growing rapidly; it was becoming a land of factories and large, sprawling cities. For the most part, Americans were proud of the modernization that was taking place. However, many began to recognize that there were some disturbing problems in American society. Many people were distressed by the problems associated particularly with industrialization and urbanization. In their minds something had to be done to address these intolerable political and social problems in the United States. Thus, the event that became known as the Progressive movement emerged. It appeared first at local levels and eventually spread to the national level. Many young, educated, and professional men and women eagerly joined the multi-faceted reform movement. The Progressives believed in progress (hence their name) and they wanted to tackle problems they believed plagued the American society such as alcoholism, prostitution, political corruption, corporate misconduct and workplace inefficiency -- just to name a few.

Readers of this book will gain a greater understanding of the reform efforts associated with the Progressive movement. This work outlines the successful legislative efforts such as improvement in workplace safety, consumer protection, and political reform. Readers will recognize many reforms the Progressives instituted are still relevant to today’s society. Additionally the book highlights the shortcomings of the Progressive movement in terms of racism and segregation. This eBook would most benefit high school students enrolled in Advanced Placement American History courses. It would also be useful to first-year college students enrolled in survey courses.

Well-educated men and women, largely from the middle class, made up the ranks of the Progressive movement. They had faith in progress and in the ability of educated leaders to solve problems in society. Many worked to secure legislation that would allow voters a greater voice in the government, provide safety at the workplace, create effective municipal governments, and regulate American society as never before. The presidential administrations of Theodore Roosevelt and Woodrow Wilson also helped to usher in the Progressive movement on a national level. Yet while the Progressives did achieve success, no less than four Constitutional amendments were passed along with reform legislation, there was also a dark side to the movement. Some Progressives believed that the problems in America were tied to immigration and therefore fought for increased immigration restriction. Additionally, the Progressive movement did little to stop the lynching, disfranchisement, and discrimination against African Americans. Even more radical was the eugenics movement that promoted the idea that American society would improve through controlled reproduction. Nevertheless, most Progressives did not support eugenics and mainly worked to inform the American people about the evils of society and sought ways to improve the overall lives of mankind.