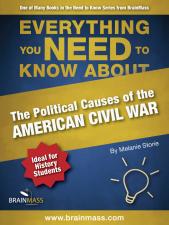 The American Civil War, a deadly struggle between Northern and Southern states from 1861 to 1865, forever defined the United States as a nation. Before the war, the United States was referred to in the plural as these United States . Following the war, this was changed to the singular this United States. More than 3 million men served during the war and 600,000 died, constituting nearly 2% of the total population. What were the causes that led the nation to such devastation? This eBook describes the political causes that directly contributed to the American Civil War. For decades preceding the war, growing sectional tensions between the North and the South increasingly threatened to tear the Union apart. During these critical times prior to 1861, American statesmen like Henry Clay crafted compromises designed to hold the country together. However, as this eBook shows, these compromises were not long-term solutions to the problems. As many of the older statesmen by the 1850s passed away, they left a legacy of compromise to a younger generation of leaders.

Yet after years of compromise without lasting results, the decade of the 1850s was marred by political disorder. Indeed, American leaders of the 1850s believed that they could continue to offer shortsighted solutions to a long-term issue that dominated the political arena: the spread of slavery into the western territories. Their efforts fell short and the country disintegrated into a bloody civil war. This eBook describes how the politics of slavery in the territories had become so intense that political leaders could no longer sidestep it. The decade began with an attempt at compromise and ended with the United States on the brink of civil war. This eBook begins with a background explanation as to why the spread of slavery into the territories became such political dynamite. The focus of the eBook centers on major political events such as the Compromise of 1850, Bleeding Kansas, the Dred Scott decision, John Brown s raids, and the disunion of the United States.

Even before the United States was a nation, underlying causes were brewing beneath the surface that would eventually plunge Americans into a civil war. While still a part of the British Empire, settlers to the Northern and the Southern colonies developed vastly different societies. For instance, the Southern colonies had rich soil and an ideal environment for growing valuable cash crops like tobacco and rice. The Northern colonies however had a shorter growing season and the rocky soil made it impossible to grow cash crops. While agriculture became the cornerstone for the Southern economy, Northern colonies based their livelihood on fishing and commerce. Very early on, Southern farmers came to rely on African slaves as a source for cheap labor. While slavery was legal throughout the colonies, it never really became profitable or widespread in the Northern colonies. After the American Revolution, most Northern states took steps to abolish the system of slavery while in the Southern states slavery became deeply entrenched into all aspects of life. To modern-day students of history, the moral implications of slavery are apparent, yet the political implications are less so.

Since the time the first European settlers arrived in the Americas, they were an expansionist people. Settlers continually moved westward in search of new lands. Particularly as agriculture became more profitable, Southern farmers sought out more land on which to grow their cash crops, which in addition to tobacco and rice, now included cotton. As a result, slavery began to spread westward. New western territories were formed and once the population totaled sixty-thousand people, the territory could become a state and elect representatives to Congress. Thus a political rivalry ensued between free states (states where slavery was illegal) and slave states (states where slavery was still permitted). Both sides wanted to control Congress in order to protect their political interests. Over time the population of free states grew much faster than slave states. The reason for the population spurt in the free states was tied to immigration. Most immigrants to the United States could find work much easier in the free states and not have to compete with cheap slave labor. As a result, the free states came to control the U.S. House of Representatives, where representation is based on population. In the U.S. Senate where representation is equal, two senators from every state, slave states became desperate not to lose any ground. Their greatest fear was that if free states came to control Congress, then slavery would be abolished. It did not matter whether Southerners owned slaves or not, by the nineteenth century, slavery was the cornerstone of the Southern economy, politics, and society. As the nation spread westward and acquired new territory, a political battle emerged between free states and slave states. The battle for political control of the nation would eventually pull the nation apart.