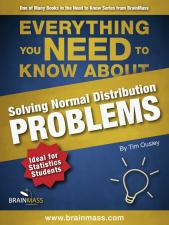 This book is ideal for first semester statistics students.

The final section introduces the central limit theorem along with an example of how normal distributions apply to sampling distributions of the sample mean.