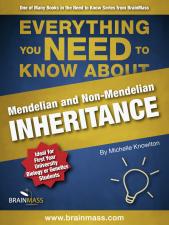 With hundred-dollar genome sequencing on the horizon and medical treatments tailor-made for each individual a reality, it is more important than ever to understand how genes and alleles contribute to the inheritance of traits, such as disease susceptibility. Although Mendel's laws account for the inheritance patterns of simple traits, our understanding of how alleles, genes, epigenetics, and environment contribute to phenotype continues to expand beyond.

This book is intended for the first-year university student in a general biology or introductory genetics course. It explains the fundamental concepts of Mendelian genetics including Mendel's laws of random segregation and random assortment; autosomal and sex-linked inheritance; co-dominance and incomplete dominance; and the use of Punnet squares and chi squared analysis. Sample problems and solutions are provided to practice the application of these concepts to predict the inheritance of simple and complex traits.

Long before DNA was identified, it was widely acknowledged that traits could be passed on from one generation to the next. An Augustine monk named Gregor Mendel (1822-1884) reasoned that a biological component was responsible for the inheritance of traits in the pea plants he bred. From numerous crosses, he was able to develop two laws that could explain the patterns of inheritance he observed.

While Mendel s laws cannot explain all genetic inheritance, they remain the fundamental principles for predicting simple trait inheritance. As our knowledge of genetic complexity continues to expand, Mendel s laws have been adapted to predict inheritance of more complex traits.

Part one of this book explains Mendel's laws of inheritance and how they predict inheritance of simple traits. The concepts of traits, alleles, and genes will be defined in the context of our current understanding of genetics.

Part three focuses on the use of Punnet squares, the ratio method, and chi squared analysis to calculate the distribution of alleles in Mendelian traits and to determine whether or not a trait is Mendelian.

Part four contains sample problems and solutions for you to use the basic concepts presented in the first three sections to predict the inheritance of traits and determined whether or not a trait is Mendelian.